Shortly after Zeke died, I went through a phase where I wanted to sky dive, bungee jump, climb without ropes--even read banned books--the list goes on. I can't say that year wasn't fun, although it was definitely filled with danger even for my literary mind!

At one point, I needed more thrills to get my mind from the pain.
That's when Cade and I tried out for:

Do you remember that show?  People could try to win loads of money, as long as they were brave enough.  They'd swim with sharks, tame snakes, eat a cow's liver!!!
Here's a picture from the actual show: 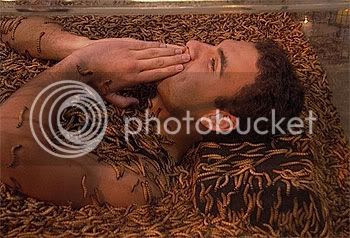 Anyway, Candiss from "Through the Wringer" helped me make a vlog to talk about this.
Here's her link if you have time to check her out.  She has an AMAZING writing blog.

SO, this is the vlog about "Fear Factor."
(I've included the dialogue below in case it's hard to hear.)


Elisa:  We're here to tell you about "Fear Factor."

Candiss:  It's a crazy, weird show that isn't on the air anymore.  So, we figured we'd tell you a little bit about it.  For money, they make people do things they normally wouldn't want to do: eating weird things, letting scorpions crawl on you, jumping off of buildings.

Elisa:  All the good stuff.  So, Cade and I decided we wanted to do it.  We thought for sure we would win because we're gutsy like that.
Well, it was shortly after our son passed away.  We made a video to try out.  Cade played the guitar.  I played the violin.  We each gave a speech and it's terrible, but I was a bit out of it after Zeke passed away.  So, at the end of my speech, I got serious and said, "My son just died.  I feel like I've lost everything.  I'm not afraid of death!"


Candiss:  Wow! You can't get more bold than that.

Elisa:  Oh, but the whole thought of them, that would be hard.  That's a little nasty.
Anyway, so at the end of the try-out video, Cade turned the camera off and said, "Why did you say that?"
I just looked at him and said, "Because it shows I'm the girl for them.  And I wouldn't be pansy girl, whining that I couldn't do it."


Candiss:  So?  It didn't show you were the girl for them.  It showed you were a liability?

*Outrageous laughter from both of us.*

Elisa:  I also love how all these years later, Cade's still blaming me for that last line, saying it's why we didn't get on the show.
But you know what?  What were we going to do with $50,000.00 anyway.  Spend it?


Elisa:  I wanted to ask the people watching this though:

Would you have let me on "Fear Factor"?  And would you ever eat rocky mountain oysters?
Posted by Crazy Life of a Writing Mom at 11:09 AM