What's the number to poison control?!

I had a TERRIBLE day yesterday (which did end up being all right).  But at the beginning, I was terrified.  Do you remember those days when I've written about how the kids practically blew up the washing machine or left me for dead, but then things turned out hilarious?!  A few people commented, saying something like "if that was a good day, I'd hate to see what happens on a bad one."  Well, here goes--get ready for a bad one.

So, the day didn't start completely bad.  I did some math and discovered some wonderful things; it just so happened AND I DIDN'T KNOW YET that Doctor Jones was playing with the fish tank chemicals while I was working.  Here's what I was so excited about that I didn't notice what was going on with my baby:


In one month, my book raised over $200 for those suffering with infant loss this holiday season. It's amazing how hard times can bring so much good if you search for the best. Because of my book, I've been able to donate $760 to this cause so far. Pretty exciting if it will help just one person.

For more info about my memoir, a new review went up today.  Here's that link: Family Reviews: The Golden Sky

Anyway, checking those numbers was pretty amazing, until I heard the Hippie scream upstairs.  Then, the Scribe screamed.  The Zombie Elf started laughing hysterically and I bolted from my computer and the laundry I'd been "working on."
What could they be up to?  My heart pounded as the screaming continued with Doctor Jones wailing louder than the rest.  Things must have been bad.  Silence is a sign of the dark side, but screaming is even worse!  That's when I saw Doctor Jones.
She'd taken algae killer and practically dumped it into her eyes.  Her face was dark green from the dye.  I put her in the tub and called poison control.
"What's the name of the product?" the woman asked.  "Who's the manufacturer?"
I told her and it turned out, there was 75% formaldehyde in the stuff and that can cause clouding and even blindness!
"Put her in the tub," the woman said.  "Wash her eyes out repeatedly, then take her to the E. R. at once."
I did what she told me and felt like a terrible mother.  What use were donations to honor Zeke's death, if I couldn't even keep Doctor Jones safe?
As I drove to the hospital, I called a friend.  "Has something like this ever happened to you?" I asked.
"Yeah.  Kids can move so fast, especially when you have four. Just breathe. I'll pray for her."
So, I continued on and the whole time I thought about how darling my baby is.  Here's a video I took of her last month.  She's such a ham.  She can be so serious and yet so silly sometimes.  It just broke my heart thinking of her little dyed green eyes. Seriously--even the whites of her eyes were light green from the stuff!

So, we got there and they took her right in.
"You want the good news, or the bad news first?" the doctor asked after many tests.
My hands clenched.  I kissed my baby's forehead.
"The good news," I said.
"Turns out she is very lucky.  You flushed her eyes so well, all of the chemicals are gone and her PH is normal.  There is no damage and she'll be okay."
"So, what's the bad news?" I asked.
"She will have some irritation for the next couple days, but I have some drops to help.  The other thing is . . . and I don't know how to tell you this . . . I think she'll be green for Christmas."
"What?"
"The dye they use for the formaldehyde is awfully strong.  I can tell you've washed off as much as you can."
I turned to my poor, darling baby, who smiled at me like this: 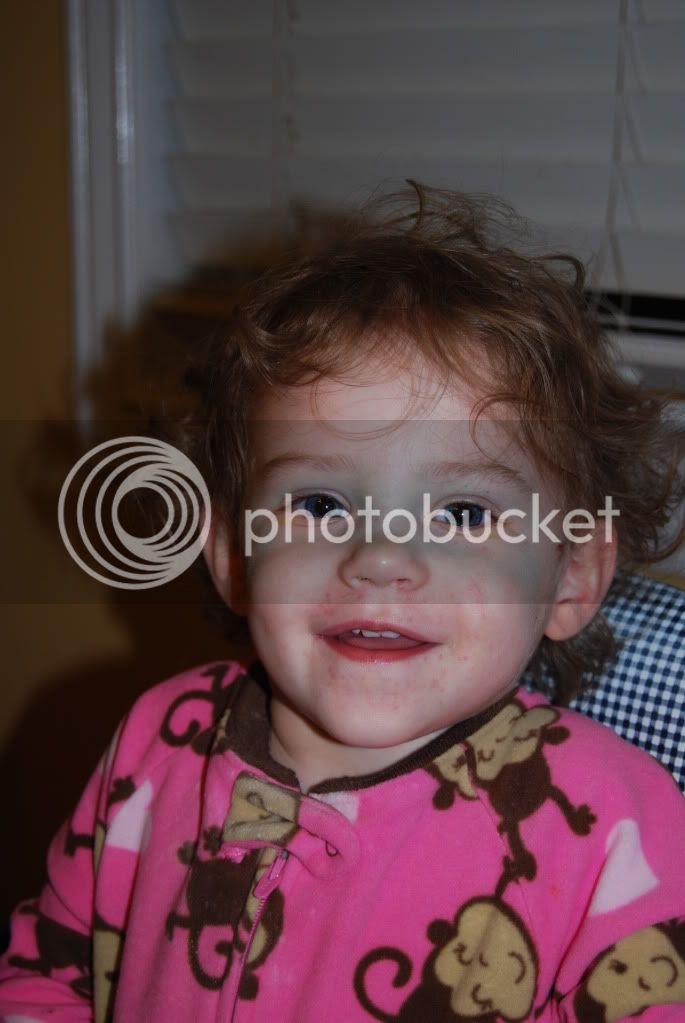 We had to go shopping later, and I have to tell you, I've heard every joke in the book.
"What?" one lady chuckled, "did she want to be the Grinch for Christmas?"
"What a cute little Smurf," another woman said.
"The Green Lantern, how epic."  A little boy laughed.
"No matter what color she is, she's darling!" a cashier had the balls to tell me!
Then, after we finished shopping, my sweet mother, who I expected to console us, started laughing so hard.  "If you put her in front of my Christmas tree, she'll blend right in!"
"Yeah."  I finally smiled.  "I guess she would."
So, I'm laughing about it today.  Thank God Doctor Jones is all right and this will be a Christmas to remember.  The time my kid dyed herself green for the holidays--ug!
Like my father-in-law said yesterday, maybe I won't ever run out of things to blog about.  Plus, I just need to make it one more month and I've blogged every day for an entire year.
I wanted to ask you the same thing I asked my friend, though; has something like this ever happened to you?  Did your kid ever dye themselves green?
Posted by Crazy Life of a Writing Mom at 9:16 AM