My Baby said "no no"

Why do people always tell me what to do?  Miss Priss wants the garbage off my porch.  Cade wants his favorite meals AND his pants actually washed.  And now . . . to top all that madness off, the baby told me "no no."
You need to read the whole story, though.  Let's back up.

Doctor Jones, my one-year-old princess refused to go to sleep.  She was so tired; her eyes looked puffy.
Why won't she act like the angel babies on google? 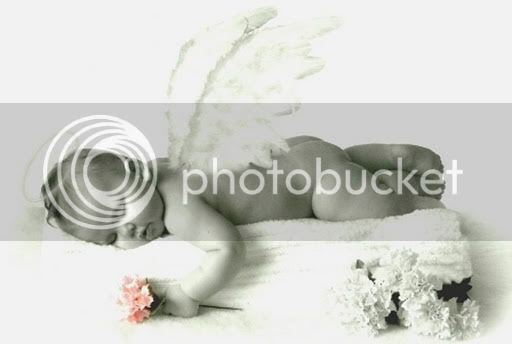 Anyway, so I rocked the kid.  I even sang.  She patted my face.  "Good, Mama."
Oh, so now I was doing what she wanted!
She sang with me as we swayed.  That kid could tame a giant.  I couldn't quite tell what she sang, just that it actually sounded in tune.
Then, the closer we rocked to her crib I heard her singing ever so gently, "no, no, no, no, no, no, no."
So I backed away from the crib.  She patted my face.  "Good, Mama," she sang.  We rocked some more, until my arms almost fell off.
I approached the crib again.  "Hush little baby don't say a word.  Mama's gonna buy you a--"
But she didn't want to listen to the song!  She didn't even obey the words.  Instead, she sang right along with me, louder the closer we got to the crib.  "No, no. NO. NO. No."
I backed away and her voice became a wisp.
"You know, if you were my first kid, I'd be totally wrapped around your finger.  You're just too smart.  But fortunately for you, I have three other kids to take care of and YOU need to go to sleep--like one of those angel babies on google."
So, I sang again, going closer to the crib.  The whole time, she sang "no" with me, louder and louder.  Then, softer as we backed away until we both started giggling so hard I dropped to one knee.
I put her in her crib after the giggle-fest ended, pulled a blanket around her tiny body and patted her on the face.  "Good baby," I said.
I leaned down so she could pat my cheek and tell me, "good, Mama," like she had earlier, but instead she cocked back her hand, gave me this strange look and hit me across the face.  "No. No no no," she sang and closed her eyes before a huge smile played across her face.  "Good, Mama," she said and rolled over--giggling!


I'll never forget it. Sure, she hit me, but it does prove the kid is smart.
You know, she just might end up being like the rest of them.  I'm a bit scared, though.  She's awfully young, which means she has a head start!


On a side note:  My laptop is dying.  I've been borrowing a friend's computer (she's SOOO nice and visiting from out of town).  Now she's going home and I'll miss her.  Anyway, I'll be without a working computer, so I'm taking my laptop to the computer geniuses today.  Hopefully they'll fix it soon so I can read your amazing blogs ;)
-E

P.S. I'll be back tomorrow, even if it is on the library's computer!
Posted by Crazy Life of a Writing Mom at 10:06 AM