How to Grow a Candy Cane

Today the Scribe and the Hippie both woke up at the butt crack of dawn (do you like how I added that--it's practically swearing--Lola that was for you).  Anyway, the Scribe set up her easel--the gift Fishducky gave her.  (She's been painting all morning.)  The Hippie sat next to me and asked in a very sweet voice, "What are you going to blog about today?"
"Maybe my gig last night.  Or the time I played the violin at a celebrity's party.  I'm not sure, though.  What do you think I should blog about?"
She paused her DSI and smiled.  "People don't want to read about the violin.  You should write about . . . me.  Why don't you write about the magic tree and the year the candy canes grew."
"Oh."  I laughed.  "How could I forget that story!"
So, this is for the Hippie, my blonde, curly-haired princess: 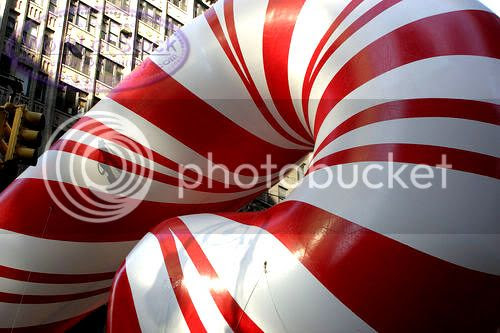 The Year the Candy Canes Grew
I was pregnant with the Zombie Elf. All the Scribe, the Hippie and I wanted for Christmas was a tree, but since Cade worked out of town for weeks at a time, I didn't think it would happen.
Then, to surprise all of us, my dad showed up with the most beautiful, real tree.  I hugged him because he's better than Santa.
After he left, the girls asked what we could put on our tree.  I raided the pantry and the house; we didn't have much that year.  Our ornaments were in one of the many boxes we'd packed in the garage.  The only things we really had were some butterfly lights the Scribe had around her room, various sizes of candy canes (about a million of them) and a couple packages of popcorn.
"This is a magical Christmas tree," I whispered.  "Why don't we do something special.  Let's put candy canes, butterflies and popcorn on it."  Among others, I had those tiny candy canes, the ones banks give out.  Those were the only ones I took from the pantry as we put them all over the tree along with some strings of popcorn.
"Are you sure we should put butterfly lights on it . . . for Christmas?" the Scribe asked.
"Of course," I nodded, "those are Santa's favorite.  It gets so cold where he lives; he hardly ever sees butterflies."
"Oh, that's awesome."
"And it is beautiful," the Hippie agreed.
So, a day and a night passed and by the time I could admire the tree, all of the candy canes were gone!  The girls went to sleep, and like an elf in the night, I put more candy canes on the tree.  They were a little bigger than the bank candy canes--still red and white.  I didn't think anything of it until the girls woke up the next day.
"The candy canes grew!" They said to each other.
"Plus, we ate all of them and now they're back."
"What do you think will happen if we eat these ones?" the Hippie asked, and the fun began.
Each day they'd eat a few candy canes and every night the Mama Elf (me) replaced the missing ones with new, bigger or more colorful candy canes from the pantry.
It was hilarious and those girls had more fun than you'd believe.
Now, Christmas Eve came, and I wanted to cry.  Like I wrote before, we didn't have much money that year, just a bunch of candy canes, hot cocoa and radio music.
I remember getting up really early and praying by the tree.  "God, please help my girls have a good Christmas."  When I opened my eyes, I saw all those colorful candy canes and butterflies on the tree, that's when I knew what must be done.
Have you ever had a brilliant idea, something Steve Jobs would have been proud of?  Well, that's what I felt happened to me.
I found what money I could, bought some discounted lawn decorations as well as some toys from the dollar store.  That Christmas Eve, Cade smiled as we wrapped the gifts.  "You really think they'll believe your trick."
"Absolutely."  I smiled. "This will make their Christmas unforgettable."

When my girls woke up on Christmas morning, "Santa" had done a number on our front room.  Huge lit up candy canes hung from the tree.  Popcorn strings were everywhere and a bunch of presents (they had no idea cost a dollar each) were under the tree. 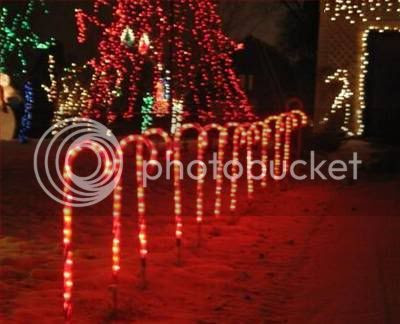 "It's the Christmas miracle!" the Scribe said.  "The candy canes grew really big this time and then they turned into lights!"
"Yeah," the Hippie nodded, "I sure hope Papa will buy our tree next year, too."


It still makes me happy because we had no money, yet it's one of the most memorable Christmas's I've ever had.  Thank goodness for candy canes and thank goodness for a father who always knows how to be there when it counts.
Thanks, Dad!