Cade and I went to a party.  "Why aren't you talking to all the strangers?"
"What does that mean," I asked.
"You're normally Miss Social, but this time you're hanging out in the back?"
"I thought it might be fun to just watch the party.  I always blog about how I meet weirdos.  How cool would it be to watch someone else have a strange experience and blog about that instead.  Plus, I can write about our signals."
Cade snorted.  "All couples have signals.  Other people might not find that interesting.  But whatever you want to do.  I'm going to join the party."
So, he went to talk to his friend as I thought about how we have certain codes we set up in Hawaii.  For example, if he wants me to quiet down and look at something, he'll nudge me really hard in the back--I hate that one.  Or if I want him to get me a drink, I'll blow him a kiss and wink toward the drinks.  I'm not quite sure how these codes came to be, but they did and it's hilarious writing about it.  Another thing, a more obvious thing we do is talk about "PS people" because it cracks me up.
"PS" stands for "painfully sexy."  At parties there are tons of people (male and female) who fit into this category.  PS people wear jeans that are WAY TOO TIGHT.  Maybe even hair that is WAY TOO CURLY.  These people can be attractive--but they've gone to so much effort it's gotten painful.  I don't care if you wear a size one, you can still find pants that are uncomfortably tight--and that's a bad choice.
They'll usually be caught in heels.  One of the biggest notifiers of a PS-er is the way they walk.  If they're taking smaller steps than normal AND you think they're smuggling something between their butt cheeks, you know they're a PS-er.
Still confused?  Let me clarify with some examples: 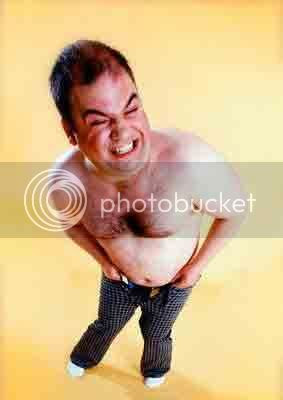 And this one . . . look at his differently shaped thighs.
I hope he has some circulation left.
Too bad, he's become a PS person: 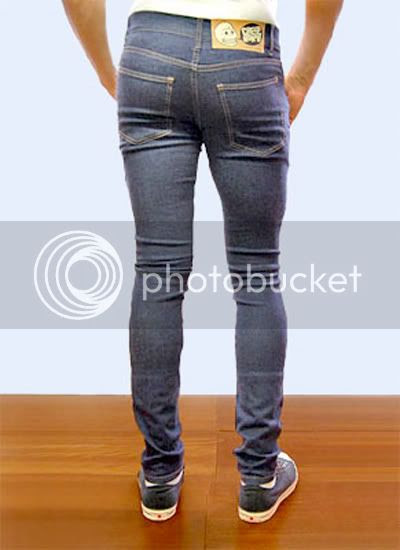 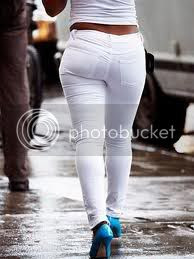 And this is as extreme as it gets.
Why wear this anywhere; it doesn't look fun: 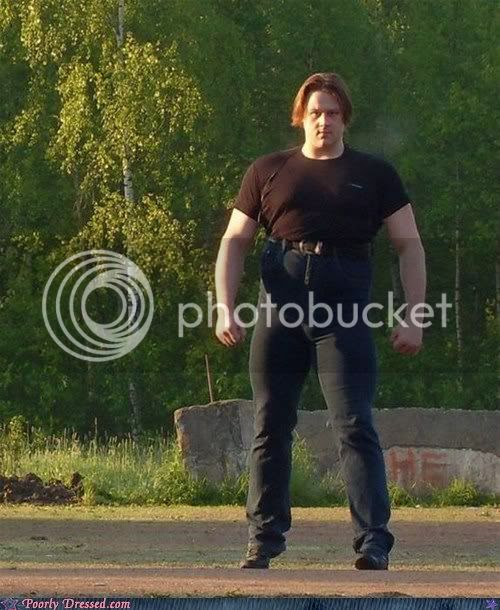 Well, one of the girls at the party was gorgeous.  I took a sip of my drink and thought, at two o'clock there's an aspiring PS-er.  Plus, give it two more years and she'd be a full blown PS-er--that was interesting, right?
So, the night went on and Cade visited with people.  I decided to sit off in a corner, drink my drink and watch.  I honestly was hoping to see something funny to blog about.  Then it happened, the aspiring PS-er sat by me and started talking.
She was gorgeous--like I wrote before--well above average.  She wore a bunch of make-up, had implants and curly hair.  I felt strange sitting there in my hoodie and glasses.  "Ummm, hi," I said.  I'd wanted to watch people, not talk to them.  Why do I always end up as part of the flippin' story!
She talked about returning to college and dating younger guys.  There she was, probably ten years older than me and I had a better grip on life than she did.  I felt bad for her and the shallow conversation we had.  But I especially felt bad wondering if she could breathe in those pants.
"What do you think the point of life is?" I suddenly asked.
"That's a weird question," she said.  "Well, I think it's to be memorable."
"And how can a person do that?"
"Well, if someone can make a bunch of money, then they'll be memorable.  That's why I want to be rich and famous."
Things got quiet after that.  The meaning of life for me is totally different.  It's about who you are and who you want to be; how you react to the good and bad times--how you treat others, even PS-ers.
And then, since I'm the queen of bluntness and there wasn't anything else nice to say, I looked at the woman and said, "You're such a beautiful lady.  It's rare meeting people as beautiful as you."
"Oh . . . my . . . gosh."  She looked at me and stood.  "I should have known.  You're wearing a hoodie!  Oh, Hon.  I'm not a lesbian."
"What?!"  Where in the hell did that come from?  Once again--why am I always part of the story!!!  "Well, great.  At least we have one thing in common.  I'm not a lesbian either."
She put one hand on her sassy, tightly-clad hip.  "I knew you were in the LGBT community.  Deep down I knew the moment I saw you."
"LGBT?"  What the heck?  She couldn't use acronyms too!
"Oh never mind," she said.
"I'm married," I yelled after her and a few people turned.
"Then why in the world were you hitting on me?" she yelled back.  I just caught Cade's eyes before he started laughing into his drink.
On the way home, I didn't say much to him.  "So," he finally broke the silence, "you staying out of the blog story . . . it didn't work too well.  Did it?"
"No,"  I said.  "I'm never going to judge someone as being a PS-er again, though.  She judged me with an acronym, too.  She thought I was a LGBT . . . lesbian!"
"Nice," he laughed.  "That's just epic.  You shouldn't have worn that hoodie."