Cade's Surprise: I could be a detective!

First of all, THANK YOU, everyone for wishing me a happy birthday.  That meant so much to me.  And it really did make my birthday wonderful.


Not to brag, but I could be a detective.  I listened when Cade whispered to my parents in the other room.  "Do you think she'll like it?"
"I'm sure she will," my mother said.  And I heard every word.
But then my four-year-old son started yelling next to me, "Mommy! Mommy!  What are you listening to?
"Elisa!" Cade said, a bit disappointed as he rounded the corner.
What had I done wrong?  He was the one hiding things from me.  Having a private party with my parents on my birthday!  He shut the door and talked so softly, I couldn't hear them clearly after that.
I strained, and before nearly giving myself a migraine, I gave up and decided to do something truly smart, interrogate my children.
My four children gathered around.  I promised them candy and treats.  Extra allowance for a month if they'd just spill the beans.  The baby (my three-year-old) stepped forward and nodded.  I handed her some candy and she started babbling at once.  "Ponies, Mama.  I want ponies!  Daddy wants ponies too."
"We're going horseback riding?"  She nodded and I giggled with excitement.
My older girls smiled wickedly at each other.  "She wants to watch ponies on TV," they said.  "You just paid her that candy for nothin'."
My boy was next.  "Give me candy," he said.
I handed it over.  "What has your father been planning?  What do you know?" I asked him.
"I don't know anything," he said. "Daddy won't tell me. He said I'd tell you."  My boy--that theif--turned around and started playing with some trains on the floor while he chewed a HUGE mouthful of treats.
"Girls," I said to the Scribe and the Hippie.  "You're my last hope.  What is going on?"
"Nothing.  We won't ever tell you.  I don't care how much candy you give us, or how much money . . . " the Hippie said.
"Wait," the Scribe said, ever the opportunist.  "How much money?"
"Five bucks!" I said.
She snorted.  "No deal."
"Six?" I whispered, pulling the money from my pocket.
"That's only three dollars each." The Scribe's nose wrinkled sceptically.
"That's all I have.  Come on, girls!  It's my thirtieth birthday."
"Fine." The Scribe inched closer.  "But it won't buy you much."  She snatched the money.
I know the Hippie wanted to walk away.  She lives by a code of honor few eight-year-olds understand.  "Scribe . . . but Daddy said we can't tell."
The Scribe winked.  "Like I said.  Six bucks won't buy much.  Don't worry, Hippie.  Here's the deal."  Her green eyes sparkled with mischief.  "You'll be with Grandma most of the day."
"And?"
"And what?  That's all you get for six bucks," the Scribe said.
I was about to take my fortune back when Cade hugged me from behind and kissed me on the cheek.  "Ready?  Your mom's taking you out really quick.  Get ready for a great time."
They ushered me through the door, while the Scribe waved 'goodbye' still holding those bills in her left hand.  The Hippie tried smiling, but looked too guilty to be truly happy on my big day.  As if witnessing that one confession, would be the end of her.

Long story short, my mom took me for coffee.  Then at noon--when I thought we'd go home--she brought me to a hair salon.  Cade had found the best streaker in town--wait, that came out wrong.  I mean "hair streaker."  I had my hair actually done for once.  Then when I got home, all of our parents waited in the front room.  Cade put his hand over my eyes and led me to this! 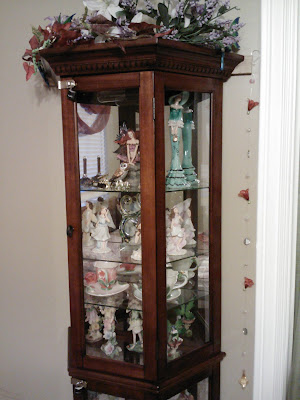 A new curio with figurines!!! 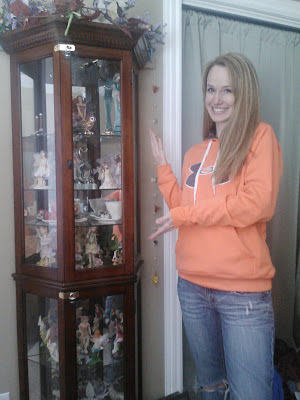 So, I may have lost six bucks, but I got something much better--a curio with beautiful figurines, an awesome family and fantastic friends (bloggers and otherwise).  I feel like the luckiest 30-something in the world.
Posted by Crazy Life of a Writing Mom at 11:04 AM