I've seen a piece of the past, from a time I was never meant to live through, but the glimpse makes me long for more.  Maybe it's since my mother loved him--my uncle--the one who died in Vietnam.  Maybe it's because I've heard the stories of how he stood against injustice even in his own home.  I still don't know why, but I want to learn everything I can about him.
I wish I could tell his story, how he was supposed to get married,  how he had so many hopes and dreams . . . but I can't do it justice.  I didn't really know my uncle, or his fiance, I just wish I did.
So without further ado, here's the official report.  I wonder if you'll find it as amazing and captivating as I did.  All I can say is that for today, on this 4th of July, my uncle is my hero.  Because some people are so inspiring, their selflessness and heroic acts can outshine death.


Page 96
Struck to earth any time they stood up, the North Vietnamese opposite Furleigh had ceased their jack-in-the-box tactics and were staying low.  The machine gun which had stopped the company cold in the first attack swept wide steel swaths over the Marines' heads.  Attempts to knock out the gun had been unsuccessful and had cost the company lives.
Lance Corporal R. P. Donathan had been the first to try. Donathan was lying near Furleigh when the machine gun first opened up and killed some Marines.  Known throughout the battalion for his aggressive actions in fire fights, he was not cowed by the near presence of death.  He asked Furleigh if he could work his way around the right flank "to get the gun." Furleigh told him to go ahead and he had set off.  Several other Marines then just got up and followed him.  He moved rapidly up a trail on the right of the hedgerow, his swift foray catching some enemy soldiers by surprise.  These his small band cut down but the sound of the firing alerted the machine gun crew.  The gun swung towards them.  Caught in the open, the raiding party was at the mercy of the enemy.  Behind Donathan, a Marine went down.  The men on the lines heard Donathan shout, "Corpsman!"
Hospitalman 3d Class T. C. Long hurried forward.  He found the wounded man lying on the trail in front of the hedgerow.  While he was bandaging the man, he heard from up the trail, Donathan shout again, "Corpsman!" Long left the first casualty, having assured him he would return, and ran on.  Several yards farther, he came across another Marine, hit in the leg.  The casualty told him Donathan had gone on alone.  Long went forward to look for him.
Both men displayed singular fortitude and determination. To go forward alone against the enemy who has struck down all others--that takes rare courage.  A deliberate, conscious act of the will was made by each man when he went on alone, knowing he did not have to do so.  Donathan went forward, driven by his determination to eliminate the machine gun nest.  Long went forward, sensing Donathan might need him.
He worked his way carefully, bent over to present a smaller target.  Occasional clusters of bullets whizzed past him.  He saw a pack lying near some bushes and identified it as Donathan's.  He dropped his own pack beside it and continued on, armed with a pistol and clutching his medical kit.  A few yards farther on, he saw an M14 rifle and a bandolier of ammunition lying on the trail.  He knew Donathan could not be far away.  He looked into the bushes growing on the side of a bank next to the trail.
There was Donathan, wounded but still conscious.  Long slipped down to him and began dressing the wound.  He had almost finished the task when he was hit.  He cried out and pitched over Donathan.  Donathan sat up and reached for him. 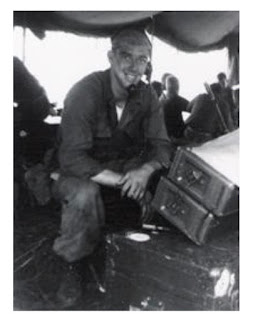 "Where you hit, T. C.?", he asked.
"Back of the knee," Long replied, "the right one.  Went right
through--maybe shattered."
Despite his own wounds, Donathan managed to inject Long with morphine.  He was trying to bandage the knee when two bullets tore into his back.  He fell on top of Long, conscious but unable to move.  Pinned by Donathan's weight and weak from the morphine and his wound, Long could not wiggle free.
Lying in each other's arms, they talked back and forth and tried to comfort one another.  It was mostly just idle talk, like many previous chatters they had in rear areas.  After a while Donathan's voice just trailed off.  Death claimed him quietly.

Here's the website where my brother found this story:
Vietnam
Posted by Crazy Life of a Writing Mom at 7:43 AM