"Grandma," I said when I was in elementary school, "I keep going to church to get saved over and over."

My grandma was a different religion than me, and she didn't fully understand what I tried to convey.

"Wasn't once enough?" she asked.

"Maybe," I said. "But maybe not. I might just be bad, and that's why God is doing this to me. When I close my eyes, I can't make the words stop. I keep seeing stories in my head. I pray that God will save me and stop the words. He's punishing me for when I've been bad. That's why He's making me see the words."

She laughed so hard before trying to clarify. "Seeing the words?"

It was always the same. I'd see these crazy hands typing more and more. A stupid red mug—with swirly paint—sat by the keys which never stopped clicking.

"Maybe it's you," my grandma said. "Maybe you're meant to be a writer."

It was my turn to laugh. "No. God is doing this ‘cause I’m bad.” Then something hit me. “If I am meant to be a writer, there's just one thing I'll need."

"Someone who's really good... I'll need that person to teach me."

Anyway, my grandma died a little while after that. She's the only grandma I'd known. Whenever I wanted to give up on anything, she would be there, wearing her beloved checkered apron, and cheering me on. And to be honest, after she passed, sometimes I found it hard to keep believing in myself as a writer.

I think that's why my grandma had to send me an angel.

So, many years passed after my grandma's death. I picked up writing again and even hired an editor to perfect my fantasy novel. But after I sent her the payment in full, the editor pulled out of the project. "Unfortunately, the payment was over a thousand dollars worth of dresses I sewed for her daughter," I told a friend on the phone. "Reselling them would be a nightmare. It's just such a specific size. Plus, her daughter looks so happy in the pictures. So, I just let the lady keep them. I guess they're going through some hard times."

"Yeah, but what am I supposed to do now? There's no way I can pay someone else."

After a small pause, the woman blurted with a hint of excitement, "I'll help you!"

At the time I had no idea who this woman really was; I'd only known her a short while. She lives in Missouri, and I lived in Utah. We'd simply met through blogging and had started an unlikely friendship that way.

Although her offer to help was extremely generous, I did feel a bit cautious. Everyone thinks they're an editor, but the truth is, the wrong edits can completely ruin a book.

"This is so kind of you," I said, then committed. "Okay, if you're sure. Let's work on editing my fantasy novel together." I would give this a shot.

It's actually quite hilarious now. The woman had been an editor for a big-name publisher while she worked with famous authors. I didn't know she'd sold thousands upon thousands of copies of her book "A Cat's Life"—in multiple languages. I just thought she was a fellow aspiring artist, an intriguing ex-nun who'd left the convent decades before, and a previous professor (with a deep understanding of Latin) who I adored for even taking the time to build a friendship with me.

The moment she embarked on the project, I recognized her level of expertise. I was the student from then on—with nothing to give—and a decade later I'm still learning. She started calling me every day. Early in the morning she'd read chapters I'd written, and then at night we'd spend between one to three hours revising them together. I went from knowing little about writing to learning more than I'd ever hoped for.

Months passed like that, leading to a life-changing conversation that I will never forget.

"When I started helping you edit your book, I was amazed with how fast you learned."

I'd wanted to reply and tell her I soaked up everything I could because that was my dream—having a mentor just like her to teach me.

She went on, believing in me more than I believed in myself. "I've read many, many authors... You really have something special."

"You're so good to me." I couldn't fathom her kindness. And as she spoke, I typed some of her words into my laptop so I could keep them forever. That's when I looked at the keyboard. My crazy hands typed more and more. Then I noticed the stupid red mug—with swirly paint—sitting by the keys which never stopped clicking. And I remembered what I’d always seen as a kid: the vision I’d described to my grandma before she died.

I tried to keep my emotions at bay, but it was so hard.

I stood, remembering my grandma and how much I miss her every day. I felt such a loneliness then, a longing to have someone like her in my life again. She'd been such a wealth of knowledge.

"Elisa," my mentor, Dee Ready, paused. "I told a friend the other day...you've endeared yourself so much to me. We started editing this and we were good friends, but now I feel as if I have a granddaughter."

I cried then, huge tears, because Dee felt like family to me too—she always had!

It’s crazy to remember how I thought God was punishing me as a kid. Turns out He wasn't. He showed me a piece of what was to come—to confirm that I was on the right path. And then, to top everything off, He let me meet someone who would change my life forever.

It's amazing that Dee has been close to us for over a decade now. She's come out to help me while I've struggled with cancer. She's helped take care of the kids. And she's shown me such an abundance of love.

I needed her in my life, and I honestly think she somehow needed me too.

Life is full of so many beautiful miracles. When she last came to see us, as I watched her playing with Trey and Indy, I couldn't help being grateful that I get to have this extraordinary woman in my life. 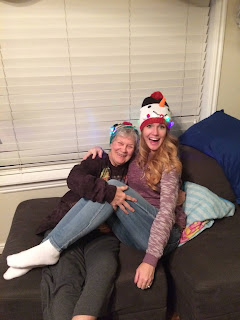 A photo from when Dee came out for Christmas a few years ago.
Several years ago when KPVI (local channel 6) featured Dee and I at a joint book signing. 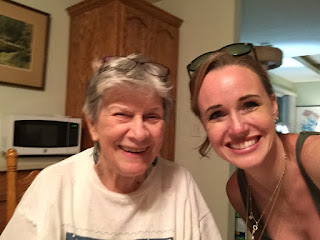 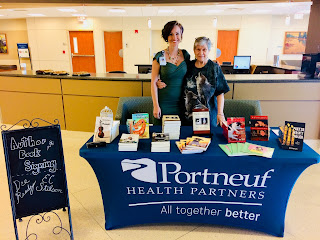