Will my life end like an unplugged clock or the slow decline of a poorly wound watch? I wondered this as we drove up the canyon to my 20-year high school reunion.

A table rested there, clad with photos and memories from the 14 class members who have already died (two from cancer and 12 from drugs or suicide). According to some doctors, my picture could be on that table for the next reunion…. It felt too sobering—especially since I could’ve died from sepsis just last week. Only a few more hours and I would’ve made it to the hospital too late. There’s something about just missing death: it’s haunting.

I worried these thoughts might overshadow the night, but after Mike and I arrived at the reunion, so many wonderful surprises waited for us. Mike taught some friends of mine how to do the lawnmower dance, the sprinkler, the shopping cart, and the sea walk. He drank smuggled booze from a backpack concealed under the table, bonded with one of my favorite friends from “back in the day,” and got hit on by someone who came across the room just to meet him.

And as people hugged me and said “hello,” a jolt of love catapulted me back into the moment. I felt real pride for a friend who followed his dreams and became a well-known chef in Park City. I beamed as a woman talked about her children. And I felt true excitement while making a new friend who recently moved home to be closer to their kids.

That one girl was there, you know the one who gets even prettier with time. The smartest kid in school talked about his epic software job. The school nerd seemed to be the only one filling out “high school bingo,” and of course there was that one guy who still doesn’t know my name.

But I was happy to show Mike off and to remember again how important it is to live in the moment. I reconnected with some legends and have made plans to see them again soon. I can hardly wait to hear more of their stories, taste some gourmet food, and go to coffee with people who only got better with time.

It was an unforgettable night—especially when Mike told someone he’d taken chemistry with them. Nothing like having an imposter at my own reunion. 🤣 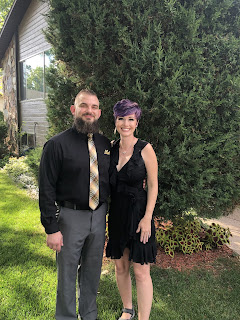 Posted by Crazy Life of a Writing Mom at 9:16 AM