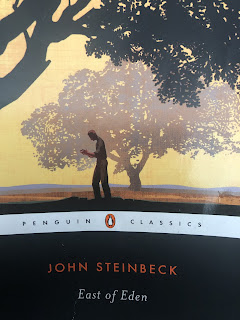 I’ve been reading John Steinbeck, exploring concepts of predestination and the disturbing thought that even God could suffer from favoritism. While humanizing God terrifies me (in a lightning from Heaven sort of way), it is interesting to read queries that will always haunt the living—regardless of when or where we were born. Steinbeck asks the same questions that intrigued Aristotle. The same questions asked by Plato and many before. The same things we ask ourselves. One such question is: What makes a life bad or good?

Steinbeck explains that if people rejoice when you die, you lived poorly. If people are saddened to hear of your death, then you’ve lived well.

I thought of this as I took Indy for a walk today. Unfortunately, I only made it two blocks before we had to turn around. “Mama, you look tired. It’s okay. I’ve had a great day with you. Let’s go home and rest now.”

It’s strange to see how wise she’s gotten at the age of 11. Sad…and strange.

We just turned around, and I ended up running into someone who dislikes me very much. We haven’t talked for about a year and a half. She has no idea that I have cancer. No idea the hell I’ve been through this last year. No idea of anything.

The gorgeous woman sized me up in less than two seconds: how I walk and stand, my crazy-purple hair, and the pain on my taut face.

I knew she judged me. And although I didn’t have my glasses on, even I recognized the smug look that slid onto her perfect face. After another second, as if telepathically thanking karma for everything it has done to me, her lips twitched into a smirk and she turned away.

I hobbled back to my house, not feeling bad about the encounter but instead being mystified. In her mind, what could I have done to justify this “punishment” of such intense suffering? Does anyone really deserve to grapple with cancer—a disease that literally eats you from the inside out?

This woman will not be sad when I die.

And yet, I must be a masochist because part of me wishes we could be friends. She’s one of the most intriguing people I’ve ever met: smart, funny…gifted. But despite that, she’s also an enigma. I can’t imagine rejoicing from someone else’s pain, even if I did feel they needed to pay some karmic debt. No one deserves to suffer.

So, Steinbeck really got me thinking. How people feel when you die might shed light on the kind of life you’ve led, but it also says a lot about them. It’s interesting….

Posted by Crazy Life of a Writing Mom at 5:22 PM