Handle It Your Way

They discharged me from the hospital, and Ruby and I quickly found our truck. “Time to go home,” I squealed.
But then the driver’s door completely deflated my hopes when it wouldn’t shut. “What the…?” Ruby faltered.
“Maybe try lifting it and slamming it?” I asked, thinking it’d gotten off kilter.
So, she did—sending a “crunch” bellowing through the parking garage. We couldn’t get the door to close. After using my cell’s flashlight, further inspection showed that the metal latch had busted, wedging inside so far that the door remained permanently ajar.
We nearly tore up our hands trying to get the piece out. “If we can move the damn thing, then I can strap the door closed so we can get back to Idaho.”
“How can we drive like this? The door will flap in the wind.”
“I’ll drive. And we’ll tighten ‘er down,” I said. Sure I’m still battling sepsis—and some things feel like they’re too much on top of everything, but I didn’t want to show my daughter that a door could best me. “You just keep me company.”
But honestly, the truth is that I could’ve cried. I felt so damn tired bending and trying to get the latch out—and striving once again to be strong. Finally, we slammed the door and got it closed enough—after shoving ourselves up against the cold metal—that I could slip a strap through the driver and passenger’s windows. It would be a windy ride home with a door that couldn’t close all the way, but at least we could finally leave the cancer hospital.
It was at this point that a sniveling, bald man broached us. Pointy nose prominent and beady eyes judging, he seemed personally offended. “Wanna try slamming that door a little harder next time? You could make even more noise!” He stopped to breathe deeply, obviously mad from far more than this moment in the parking garage. “You’re causing quite a scene.”
I knew he had cancer too. But he has something much worse—a mean attitude. Normally I’d feel bad for the man, reach out, and turn the other cheek. But then I thought about how instead of offering to help, he’d simply come to make things worse!
“Sorry. We’re just desperate to get back to—“
“Slamming your door?!”
“Ya know….” I said, and I’m embarrassed to admit that a little bit of fire lit my eyes. “Maybe I will slam it—just ONE more time.”
But of course I didn’t. And after I got in the passenger side and shimmied over to the steering wheel, I backed up and waved to the gape-jawed man who’d only offered cynicism.
“What is wrong with some people?” Ruby asked from the passenger seat. “He seriously came over just to be rude?”
“He must have too much on his plate. I guess he can handle his problems his way, and we can handle ours another. That’s all WE can control right now.”
So, we cranked up the music, didn’t care that: our A/C doesn’t work, the truck is missing chunks from the seats, or that the door was Jerry-rigged shut.
“It’s off to Idaho,” I practically sang—so happy to be free. And despite the fact that the wind styled my hair to look like the ‘80s, both Ruby and I smiled almost the whole way home.
Pic: Us taking silly selfies at the hospital, choosing to make the best of things. 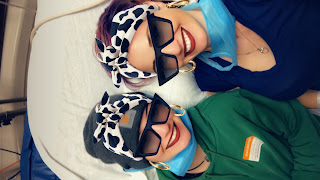 Posted by Crazy Life of a Writing Mom at 7:37 PM