Simple Words to Tie Up a Life

Trey and I stood on the first floor of a hotel in Bannack, Montana—a ghost town, part of the Lewis and Clark Trail in 1806 before being declared the First Capital Territory of Montana in 1864.

We both stared out the window, wondering who had been there before us, and I felt proud to be introducing my 13-year-old son to a real part of history.

But as I looked out the window, a strange memory hit me from 10 years before. A proprietor purchased an old building in Deadwood, South Dakota, where Butch Cassidy himself allegedly visited. The owner asked me to play my violin in the upper level, and a strange song had come to me. With every note I could almost see the old drapes materializing and a newly shined floor suddenly gleaming. People played cards, laughed, and fought rising tempers.

I remembered and smiled. But what’s odd is that as I stood with Trey in Bannack, Montana, another song came to me—a sweeping melody….

I’m still not sure why, but I started singing it, slowly, surely, and I could almost imagine the town, rife with excitement. The street filled with colorful characters, horses corralled down the road. I could imagine it more vividly with each note. I was there—in my imagination—and it WAS beautiful.

Then Trey clutched my hand. “Mom! Stop. Stop singing.” He said shadows shifted and light had moved down the hotel’s hallway.

So, Trey and I left the nearly 200-year-old hotel and joined two of his siblings and Mike who stood outside of the building. We visited a cemetery after that, where the oldest person was born in 1809.

“It is strange! How people choose to identify themselves, especially at the end. It makes you wonder, what gives your own life meaning. It’s clear what gave them meaning.”

I looked at him so proudly. He’s such a deep thinking young man. I know something truly “good” and “kind” will define him.

Then we left. And it wasn’t until the next day that I became hospitalized in Bozeman—the closest town with a hospital. “You’re lucky you came in when you did,” the doctor said. “A few more hours and it could have been…devastating. You have sepsis—an infection in your blood. You’ll be just fine now, but you always need to be near a hospital. When you have cancer—and are in a situation like yours—there are certain things you just can’t do.”

I heard his words and took them to heart. I do need to be more careful. But after visiting hours ended, and I sat alone in the hospital room, I instantly thought about the ghost town and all of those old graves. It’s not my time yet—and hopefully won’t be for a long time—but when it is, what will define me? What set of words will tie up my simple life? 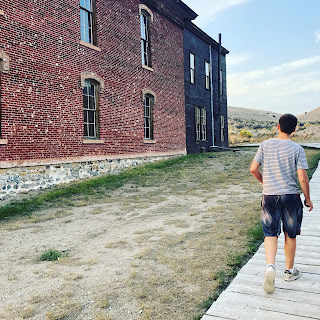