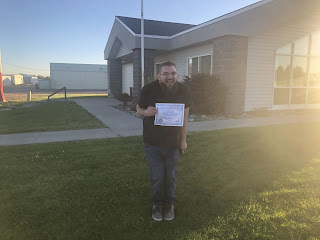 When we chance losing what really matters, that’s when things get clear. The loss of a loved one, a dream, an ability…can magnify our “truth.”

Lately, I’ve watched my family sacrifice to trade time—possibly the most valuable construct we have. “If you want to join the Air Force, don’t put it off for me,” I said to my 17-year-old.

“But I don’t want to miss time with you. This whole thing has put everything in perspective.”

These words mean more than anyone can fathom, but as the person who’s sick, I don’t want people sacrificing dreams for me.

Mike did this. At the age of 19 he’d planned a move to Seattle. Almost more than anything, he wanted to leave Utah and get his pilot’s license. But life took a turn.

His dad got cancer, and Mike refused to leave. He traded an ideal for something invaluable: memories with his father.

It’s crazy how priorities change when weighed against the threat of death.

Time passed. Mike’s dad recovered, and he’s been doing awesome since. But Mike never moved to Seattle. He landed a job at a food-processing plant (like his father and grandfather before him), bought a house, married a single mom…who then got cancer. And it seems that fate has brought him right back where he started.

“I’ve watched him give up so much to take care of me,” I told a dear friend. “He’s worked, tended to the kids, waited on me after surgeries and treatments….”

“That’s what you do when you love someone.”

I sighed. “It’s so strange how life turns out though, right? Can you believe he wanted to be a pilot?” I briefly relayed the story. “I wish Mike could actually fly a plane someday. We must all have dreams, locked up deep inside…. He’s just done so much for me; I wish I could give him the world.”

The next day I lazily opened my computer, only to find a message from my friend. She’d set up a time for Mike to visit a local airport!

“What?” I balked at the screen.

“It’s all taken care of,” the message read. Mike would get an official lesson where he’d actually fly an airplane! “I would love to come and be there when you do this, if you’d be okay with it,” my friend wrote.

I could hardly wait to see her—and I couldn’t believe she’d done something so wonderful!

This isn’t a post to “feel bad” about regrets or lost opportunities. We all age. We all have responsibilities. But this is a reminder that life is meant to be lived—no matter if you’re 19 or 90. You’re breathing d*mn it; do SOMETHING with that ability. 😉

So, last weekend held one of the best days of my life: to see Mike step out of a plane he’d just landed. He glowed, excited about the wind and the speed. His arms moved with such animation, swooping and diving as he weaved his story. (Just look at the picture in this post—he’s such a hilarious goofball!)

And my dear friend, her smile is etched on my heart forever. “I just love you,” I told her.

“You too, Elisa.” Then she beamed, watching Mike bounce around like Tigger, telling us how grateful he felt for the opportunity.

Goodness multiplied seems like a perpetual-motion machine that can cast out any type of regret or fear. I felt such a sense of wonder seeing Mike reveling in the moment, and I’m beyond grateful to my generous friend (and her husband) who made this possible. They gave us something unforgettable: time well spent with those we love.

Posted by Crazy Life of a Writing Mom at 7:28 PM