Over a Cup of Coffee 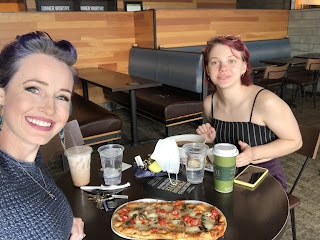 “This is taking FOREVER,” the woman fumed even though it had been less than three minutes. “You’re making me late for work.” She’d already complained about rolling her window down and yelled because they were out of a specific syrup.

The teenage barista frantically took another order at the drive-through, started a simultaneous fourth drink order, and handed the cranky lady her drink.

“You know,” the woman seethed, “I’m having a TERRIBLE day—because of all this! Because of YOU. You’ve made me late! I’ll pay for the person behind me so at least SOMEONE can have a nice day.”

The barista could have cried. She’d had a tough day too: everyone had called out sick because of COVID, she’d been treated terribly by two customers already, AND she worried about her mother—whose cancer seems to be getting worse….

The barista nodded as she tried not to cry. “Okay.” She forced a smile at the unhappy woman. “I hope you’ll have a…nice day….”

The woman must’ve realized how childish she’d been. “You must think I’m a terrible person!” she said. “It’s just because I haven’t had my coffee yet today! That always makes me cranky.”

Yes…. That was it. She’d yelled at a child because she hadn’t had her coffee yet. That made everything better. #sarcasm

Then she drove off. And even though she had paid for the person behind her, she had also momentarily derailed the little barista’s day.

When my daughter told me what happened to her yesterday, I got so upset. With everything we’re going through, we try to be extra kind to other people because you never know what they’re going through. I just can’t imagine treating someone so terribly over something as insignificant as coffee. Plus, it makes me sad that someone treated MY kid—who’s only 17–this way. She’s doing the best she can and honestly dealing with a lot.

I just wish people would realize that workers are exhausted right now. AND that’s someone else’s child. (I sure hope she wouldn’t treat her own kid that way.) Why not lift each other up, instead of tearing each other down?

Posted by Crazy Life of a Writing Mom at 9:20 AM