“But he’s never had a surgery before!” Trey said, so concerned for Mike. “I should tell him something, just so he knows he’ll be okay. I mean…could something go wrong?”

I realized then how worried Trey is about Mike. I’ve been so sick, and Mike has been the rock for our children.

That aside, where was this concern when I’ve millions of surgeries?! The kids don’t worry at all when I go in. And when I asked Trey who his favorite is—between me and our dog—he said our dog!

“All right. What are you gonna say then?” I asked, plastering a smile onto my face.

“I’m gonna tell him that everything will be fine!” Then he paused. “Wait. That’s what you say to someone when it’s NOT gonna be fine…. Then he’s gonna get really suspicious. And he’ll get nervous. And he’ll be FREAKING out until Friday!”

“You know what. I’m not saying anything! Plus I don’t want to jinx it. Remember how you woke up during that one surgery?”

I groaned from the memory. “Yep.” I actually sat up, my eyeballs were about four inches away from the doctor’s shocked faced. It was crazy hearing him scream like a little girl.

I did have to break out laughing after Trey left for school. He’s obviously thought about this a lot, and he’s SUPER concerned.

So, Mike’s first surgery ever is Friday, and apparently everyone in the house is worried. (I just want to know which ice cream to buy him!)

He’s gonna do great! It’s like my dad says, “He’ll get to go on vacation without even leaving the farm.”

(This pic is from a recent road trip Mike and Trey took to a concert. These two really are best friends.) 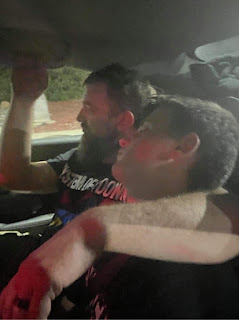 Posted by Crazy Life of a Writing Mom at 8:52 AM