I had boobs for a day!

One of my best friends called. She said, “My fourth-grader is wearing a bra now.”
I pulled the phone away from my head and looked at it for a sec. “What?”
“A bra.”
Well, didn't that beat all.
“But I didn't want to buy her one of those sex bras from Victoria Secret. So we went and got her a regular one at the kids' store in the mall.”
That was as funny as Hell, how she called it a sex bra. “That's just insane," I said. "My kid's in third grade and she still looks like a baby.”
“Well, just get ready for it. A girl in my daughter's class already started her period.”
After I gathered the shock from my voice, I asked, “So, she's wearing a training bra. Looks like Santa came five years early . . . this year. He must a brought her her two front boobs and her teeth.”
“Except it's not a training bra. She's in a size 32A.”
My mouth jarred open. What the hell! That's the size I wear. I guess it's 'cause I'm so skinny. I don't look like I just escaped from a religious cult or anything, but still . . . “Flip, she's the same size as me. I'm no better than a board with water rings and that just proves it!”
My friend paused, not knowing what to say. “Oh, honey. She doesn't look nearly as big as you do.” As if she's even checked out my boobs. So basically this kid has mosquito boobs like I do, but I shouldn't be sad because I look bigger—that's fantastic. I wonder what God was thinking when He made me. Maybe He thought, “Hey, I'll give this one an indentation. At least she'll have something in common with Goldie Hawn, and that can't be all bad.”
I thought about all of this when a delivery man knocked on the front door. They were these big resounding knocks. Boom. Boom. Boom. Everything shook in the house except my boobs.
"Is there an Elisa here?" he asked when I opened the door.
"That's me," I said a bit stunned.  He handed me a huge box from Canada and I kinda felt like I'd finally made it in life.  After all, getting mail from Canada is epic.
I took the box to the front room and looked at the return address.  Pat Hatt!  No way--that guy's part-genius, part Seuss!  You can see what I mean HERE.  What could he have sent me?
I gingerly opened the box, not wanting to ruin anything that's been in Canada! Then I pulled out a package that read Miracle Product! Instant Breasts WITHOUT THE PAIN.
So Pat Hatt is a genius AND a saint.  I opened the package, thinking it was Miracle Grow.  Maybe I'd stuff it down my bra and become Aphrodite. But when I saw the actual product, I laughed out loud.  Mr. Patt had bought me a . . . Dun Dun Dun . . . blow up bra!
He's hilarious and it was a pretty funny joke.  I bet they weren't really meant to use.  But I'm a curious sort of gal and I had to put the suckers on.
Can you believe it actually looked good?  They did, really!
So, I was the Little Mermaid, finally getting legs instead of a tail.  Err . . . I mean, boobs instead of desert plains.
I wore my blow up bra all day--since magic does exist.  And can I tell you that after all these years of dreaming and scheming, hoping and wishing . . .
I HATED having boobs!

#1 I could find all of the dirt bags in a mile radius, because they kept staring at my boobs.  (This made me giggle since I was just made of hot air!  Take that, creeps!)

#2 Boobs are cumbersome.  I tried playing my violin and the boobs got in the way.

#3 I am a sporty chick. I like being able to jump and play, fit into tight spaces.  For instance, that day an idiot parked an inch from my van.  I almost popped a boob.

That was the bra's only flaw--fear of popping.  Oh and denting!  Cade hugged me and one side indented.  Can you see it in the picture below?  I tried pushing in the other side, but then it was dented and the other wasn't.

Yep, the cycle of death. 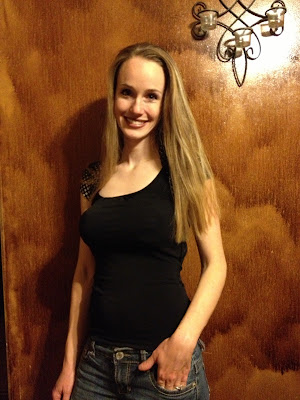 Anyway, this whole thing got me thinking about the crazy,
ridiculous expectations we put on ourselves.
Don't believe me? Look at this poor kid!
So back to the story, after having boobs for a day, I'm not impressed.
God made me who I am for a reason.  I'm not the cookie-cutter mold.  And maybe that's actually something to be proud of.
And this doesn't go just for me.  We should ALL be thankful for who we are.
Life is short, why spend it wishing we could be different when the fact is, we're lucky to be alive.

So today I took a silly stand--which is really a big step for me.
This is me.  No makeup, not even a padded bra (shocker).

BUT I still have the blow up bra and if I regress, I can always put it on and remember why I hated having boobs for a day!

Signing off,
Elisa
Posted by Crazy Life of a Writing Mom at 9:21 AM