Not the Rock I was Expecting

Have you ever left with a total stranger, ran far from everything just to find yourself?  Well, that's what I did.

I left with Cade in the beginning of December.  I'd met him a week before Halloween that same year.
Fast forward twelve years . . .  Here we are in the present day. Cade works all of the time.  I think he has a pretty glamorous job.
Don't believe me?  Look at these pictures: The only catch is that he's usually just home on the weekends.
Well, last week Cade came home on Friday night.  As he stepped from his big construction truck, dust swirled around him.  His skin appeared dark and tanned.  He tore off his work sunglasses and I ran into his arms.  I'm sure we were both covered in dirt after that.
"I brought you something," Cade said, taking off his hat and putting it on my head.
"Really?  Something for me?"  I got excited.  I've always wanted jewelry and I could just see it in his eyes.  He'd brought home a necklace, a huge gem, a sparkling rock to be proud of!
At that point our four children ran outside and hugged Cade's legs.  "Daddy!  Daddy."
"He brought me something!" I told our oldest daughters, giggling.
"I'll give it to you after these guys go to bed," Cade said, hugging all of the kids.
I put the children to bed early that night.  I could hardly wait.  What in the world had Cade brought home for me?  We've been through so much, being homeless, losing a child.  I mean hell, the man has seen me through the worst and still stuck with me!
"Everyone's asleep," I scampered down the stairs and squeezed Cade's hand.
"It's six o'clock."
"I know.  Isn't it wonderful!  I wore them out."
So we went outside.  It was already dark, and Cade had to find a flashlight.  It shone on the snowy ground and my heart beat faster and faster.  "Well, it's just inside of the truck."  Cade grabbed the handle.  But before he opened the door, I gave him a huge kiss.
"Whatever you brought home,"--even if it was a small diamond--"I just want you to know how much this means to me."
He chuckled. "You're gonna love it."
The door creaked open.
The flashlight shone on the back seat's floor.
And THIS. IS. WHAT. I. SAW. 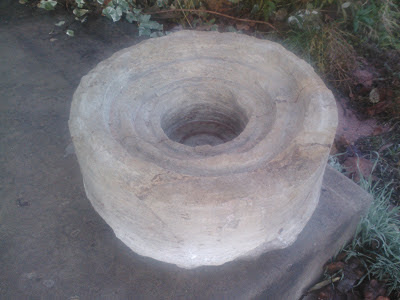 "What do you think?" he asked breathlessly, trying to lug the thing into MY FRONT YARD!
"Ummm . . . it wasn't the rock I was expecting."
"You knew it was a rock?"
"In a sense," I said very slowly, as he actually carried the rock-core like Hercules!
"But you like it?  I knew you would because you love rocks."
"Yeah."  I looked into his moonlit eyes and he seemed utterly happy, completely proud of his gift.
"I love you, Cade."  I threw my arms around his neck after he set the rock down.  "It's so heavy.  I bet it was hard getting into the truck?"
"Yep. But you're worth it, Elisa."
So I got a new rock.  It's sitting at the bottom of our front stairs now.  It wasn't the rock I was expecting, but I guess it'll have to do.

For more pictures from Cade's work, please go HERE: Most Wanted Drilling.
Posted by Crazy Life of a Writing Mom at 10:27 AM