Update on The Hippie & An Allegory

The Hippie is still feeling really sick. The teacher called me yesterday because my girl was doubled over at recess. The blood and Celiac tests all came back fine. But I think they're wondering about her appendix now even if her other tests aren't showing any signs of appendicitis.
I'm taking her in for an ultrasound first thing tomorrow morning, so I'm hoping that will help bring answers somehow. I keep worrying that she could have some type of hernia. Cade had one . . . Zeke died from one in his diaphragm. Anyway, we'll see what will happen.
All of these pains, and the throwing up really has me worried. Thanks again for your prayers.

Now, onto an allegory. I've been having a hard time with certain things, so here's my way of writing it out.


The Path Where All Men Are Tested and Tried 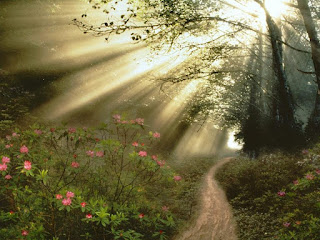 The dirt path stretched far ahead. I knew I should travel straight toward the afternoon sun, but things weren't that easy. Traps rested on both sides of the trail--traps meant to entangle human minds and souls.
I'd seen strange things along the journey--a woman who chained herself to a rock because she wanted to constantly stare at the valley behind her, where she'd come from, memories of what she'd done and those she'd lost. I met a couple so concerned with diamonds at one "Y" in the road, they didn't keep traveling. They'd been so weighed down with riches, they set up a shop and enticed others traveling behind them.
I shouldn't have judged though. I too had vices that could keep me from moving along. We'd all been walking this path since the day we were born. Each soul wanted to find a place we'd heard of, the paradise only the sun could illuminate at the very end of the path.
Thinking of all these things, I went up over a hill. Of course two more traps rested ahead. One was a cage, sitting on the left of the path and the other trap waited so far away I struggled to see it.
Huge lush trees hung in contrast over the metal bars of the cage. I looked at the man inside. Although the door splayed open, the man wouldn't leave. He rocked back and forth, holding an electronic device that was chained to a bar. "Come out," I said. "The door's open. You have to know we're all being tested and tried. Come with me. Maybe we can walk toward the sun together."
His sad eyes gazed at me. "Why would I come out?" he asked.
"Because, you're in a cage . . . don't you want to keep moving? Imagine the wonders we'll see if we can just make it."
"No. This is more important. I have to stay here because I can't bring these pictures along."
I looked at the images on the electronic screen and felt sick. "You won't keep going?" I asked.
"I've tried. My brother got away, but I keep coming back."
I left him and walked farther, remembering a time when I'd lost my own way. Instead of walking toward the sun, I'd veered onto another path and nearly fallen off a cliff. I lost someone close to me that day--part of myself.
After time passed, I finally saw the other trap more clearly. But as I looked, it broke my heart. Dozens of people were in a deep hole, screaming for me to help them. I reached down, but it was too far to save anyone. The people below me battled fighting and clawing. One woman climbed onto a man's back. She was so close to reaching my hand, but then the others pulled her down.
Another part of the hole sloped just enough that someone could climb out if they were good enough at climbing, but no one would let them.  They just grabbed each other again, being selfish and greedy. "I won't let you get out first," a man screamed. Each time someone got close to the slope or my hand, another person would yank them down.
"Work together!" I said.
"And let someone else get out first? They'll rise above the rest of us! If I can't be the most successful, then no one else can."
I gaped. It was one of the saddest traps I'd ever seen.
"But we can all succeed," I argued.
A man laughed cruelly. "You are so stupid."
Then all of the mockery and jeers they'd been sending to each other turned to me. "You're a failure," they said. "You actually think it's important to make it to the sun? You'll never make it there, ever. What a pipe-dream. It's the sun and you're only a human."
"We've never met anyone who's made it there," one woman in particular shouted to me. "Turn around. You're going the wrong way. Instead of chasing the sun, the perpetual day, shouldn't you be chasing the night? It can't burn you. You won't be as exhausted from the pounding rays. You won't even be able to see the traps at the sides of the road."
"But then I won't be able to see anything clearly in the darkness," I said.
"And so you'll never experience pain again.  Isn't ignorance bliss?" Somehow her words made sense. In a strange way, I became more mired than ever before.  I stayed, trying to talk to the people--reason with them. And as we all debated, I was too busy arguing to notice the woman who'd first confused me so much, the woman who spoke of the night.
She sneaked behind the group and climbed up the slope leading from the hole. Now that no one noticed to pull her down, she finally made it out. "I'm free," she shouted, then instead of going toward the night--the way she'd told me to go--she ran toward the sun and laughed. "I want to be the only one who succeeds. Me! Me! Me!" And the woman ran, seeking success and happiness, still hoping everyone else would believe her words and go the wrong way.
I no longer stood after that.  I no longer continued on my way.  Depression overtook me as I tried reasoning with those unwilling to help each other, and the whole time I wondered why some people think success is only attained when everyone else fails.

Well, I'm off to keep working on Homeless in Hawaii. I'll be back next Wednesday. Fishducky will be guesting here each Monday and Friday to help out while I'm taking a break. I hope all of you are doing awesome.

If you're new here and would like more info about my books or writing, please visit my author site: www.ecstilson.com
Posted by Crazy Life of a Writing Mom at 10:29 AM