My friend just passed away. The amazing Layton Funk.

I just found out that my friend, Layton F Funk passed away. He was the most amazing, inspiring person.

After first meeting him, I wrote about the experience. It later got published in the Island Park News and then a book. When I gave him copies of the publications, Layton beamed, just saying he was so proud of me. But the truth is that I was so proud of him—just to be his friend made me feel like the luckiest person in the world.

And now, as doctors are saying I will have much more than two years, I look back and have to give a bit of that credit to Layton, for encouraging me to keep going when my treatments felt beyond bearable. I’m so lucky I found him that day as I browsed online…fortunate he let me be his friend.

He’s one of the people who completely changed my outlook after my diagnosis. It’s so hard to believe that he’s gone. 💔 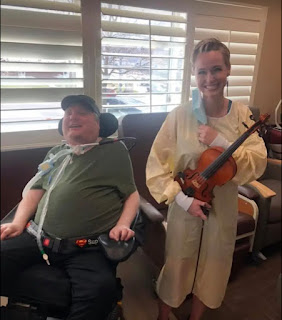 Sometimes we meet people who profoundly influence our lives—and they might not even know it. That’s how I felt when I met Layton Funk.

After cancer interrupted my life, I browsed Facebook and simply found Layton’s profile; he seemed inspiring...and so interesting. We started talking and eventually decided to meet up sometime. But meeting someone in person is always so much different than talking online, and I was really nervous.

When I entered the building, I mentioned who I’d come to visit, and everyone around raved about Layton.

It took quite a bit to see him though—COVID-19 has put so many obstacles in everyone’s lives. Both wearing a mask, Mike and I had to wash our hands for the appropriate time (as someone watched us), then we donned plastic gowns, took a COVID nasal swab test, washed our hands again, sanitized, then waited behind a glass screen.

“I’m so excited,” I told Mike. “He seems so awesome online.”

Then Layton simply rolled into the room, and I immediately smiled. He joked with us right off the bat, being far more witty than I expected, and the hour-long conversation that followed has moments I’ll never forget—he even let me play my violin for him.

Layton is quadriplegic. He was in a car accident in Idaho over a decade ago, and now he lives in Utah, where he’s made his entire staff fall in love with him!

We talked about everything from his identical twin, our love of superheroes, board games, and his advice about how I can handle terminal cancer.

We were told to stay behind the glass, but at one point Layton talked about his room. So, we repositioned the “straw” that he uses to move his chair with, and then he broke us out of jail and led us on a secret mission to his fortress of solitude.

“Just act like you own the place,” he told us, grinning. And we strutted past the desk, like nothing was amiss! The staff didn’t even look up—and we actually reached his room! I could hardly believe it. But I guess that’s just what happens when someone like Layton leads you on an adventure.

He has an ENTIRE walk-in closet filled with the greatest superhero collection known to man. “Holy crap!” I whispered. “This is...AWESOME.” It was like walking into Narnia, but different because I saw a bunch of Supermans instead of Mr. Tumnus.

We sauntered back to the meeting area—with the glass barrier—and this time someone from the center followed us, probably a villain on our scent.

At the end, I asked Layton how he does it. He had a completely normal life until the accident. I just can’t imagine what he’s gone through over the years. This handsome man, who’s still young and has endured unfathomable trials...

“I’ve been able to help so many people through this. It’s my purpose.”

Tears brimmed my eyes because I’ve never met someone that positive and strong! He went on to explain how life can bring the strangest miracles—even if they don’t seem “good” at the time. His eyes sparkled when he spoke and for me the world changed. I still can’t imagine that kind of strength—but I’m proud to know someone who does.

“I’ll come back! We’ll play board games.” I promised, BUT that doesn’t mean I’ll let him win!

Even after Mike and I left, I couldn’t shake the experience. Layton completely inspired me. His positivity and kindness are humbling. I can hardly wait to get back there so I can beat him at Monopoly!

Posted by Crazy Life of a Writing Mom at 9:48 PM