Is Pompeii Worth Seeing? A Tourist Perspective.

Some people died clutching belongings while others died holding each other—or simply themselves. I’ve thought about this often, especially at parties when some new-age philosopher will ask something like, “If you were in a natural disaster—and you could only save one thing, what would it be?”

No one heeded the earthquakes just years before, and 2,000 residents of Pompeii (up to 16,000 people in all, counting surrounding areas) perished after Mount Vesuvius erupted in 79 A.D.

It’s odd to think some of these victims’ final moments have been immortalized. I read about it in elementary school and never forgot. The whole place just seemed so curious … morbid … and yet so beautiful in its agelessness.

Somehow fighting cancer, that’s one thing I’ve pondered, not being forgotten. But we’ll all be forgotten someday. We can’t even see the “end” of our ever-increasing universe. The speed of light is even slow when compared to how long it would take to reach what we foresee as “the end.” Yet, we worry about being remembered. By whom? Everyone we’ve “known” will have passed away within a century after we die.

And yet people worry about the silliest things. If a waiter forgot their soda. If their haircut looks nice. If their husband put the dishes away. If people are impressed by their new car.

Still … Pompeii is so much more than a philosophical catalyst. And when Mike and I went through the once-majestic city, my soul ignited with passion—and I watched the same thing happen to Sky. I can’t run or sprint or skip, but I wanted to rush everywhere, exploring each home, courtyard, orchard, temple, and the 20,000-seat amphitheater. But I can’t. Most of the city is wheelchair accessible, and Mike pushed me across the bumpy walkways. I would get up from time to time when Sky skirted down a road and told me I should “come check it out.” 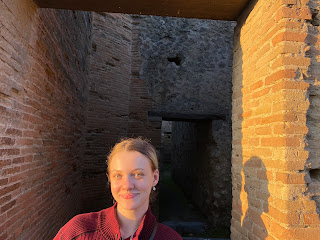 Sky ran and discovered exactly in the way I would’ve if I were in better health. She jumped and hollered, talking with so much animation about the new things she’d just found. At one point, when she led me to an amphitheater—that Pink Floyd actually played in for a documentary in the 1970s—I watched her and tears filled my eyes. I’m just so proud of the curious, content person she’s become. She’s only 18, but she’s already starting to accept who she is and who she wants to be. I really saw that in Pompeii as she reflected on the ancient past and what she wants for her own future. 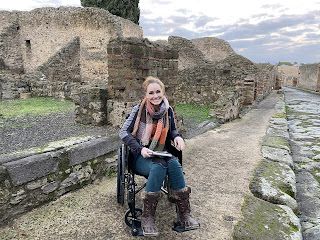 At one point, the sun began setting and although we’d seen casts of the deceased in the museum at the top of the hill, we hadn’t found any in the city which stretched much farther than what’s shown in history books.

“These streets,” Sky said, “it’s just unreal to think how many people have walked these same streets and how advanced they were back then.”

I nodded. “You know I’m not Christian anymore, but it is strange thinking this is how the world looked when Jesus was alive.”

Just then, as Sky helped me along the street, she paused. “Wait! I think we found one.”

I pushed myself out of the wheelchair and walked across the rocky street. Everyone else had gone far ahead to where a huge colosseum rested. But Sky and I stayed behind, pondering every detail.

In that moment, fate rewarded our patience, and we stood in front of a cast, feeling so much emotion. The man had died in obvious pain, you could tell by the way his body contorted around the large object he held. “Do you think it’s a vase?” I asked.

I felt bad that the cast showed so much, we could tell he’d been a man—a tall, skinny man. Vesuvius had left little to the imagination, yet I couldn’t pull my prying eyes from him.

After facing my own diagnosis, seeing someone’s traumatic death from almost 2,000 years ago sent shockwaves through my body. I wondered what his hopes and dreams had been. But even more than that, I wondered what he held in his arms. Was he happy to be remembered in such a way? And how will … how exactly will I die when the time comes? Will I be hooked up to machines or at home? Will I be remembered for longer than several decades, and will it even matter?

I’ve always heard days before someone dies, they know it’s coming. People say they’ll often talk about death or reach out to the people they love most. I think that’s a reassuring lie we tell ourselves to make it seem like we have a semblance of control. It’s unnatural to know the time of our demise.

That’s something modern medicine has partially stolen from me. But it gave me the ambition to visit Italy and inspired me to live with intention.

I thought about all of this as we studied the man’s cast in front of us, and Sky must’ve had similar thoughts because she stood mesmerized as well.

Our family spent almost three hours amongst the “ruins” of Pompeii and only saw a portion of the city: homes, roads, gathering places, art from the time, bathhouses, kitchens, and even writings perfectly highlighted by moss. Yet, it will remain the most wonderful place I’ve ever visited (even topping a Jamaican bioluminescent lagoon Mike and I once swam in).

Anyway, it’s rare for such a tragedy to yield beauty, but that’s what I’ve decided to hope for in my final years. I want to be like Pompeii. I want my sickness and trials to yield something good. Even if I am only a speck in time—I’ve found something to give me peace. I hope to make the best of my time, spending quality moments with the people I love. 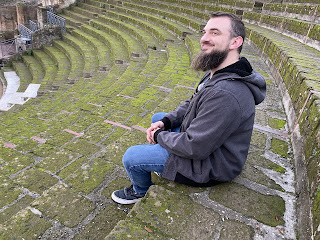 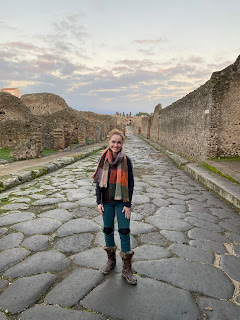 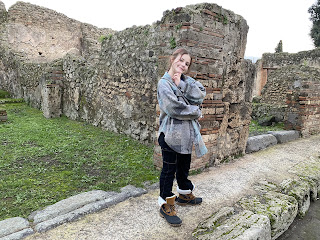 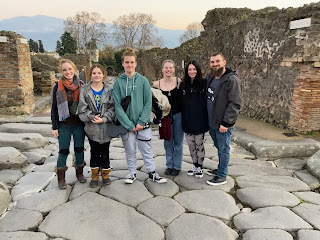 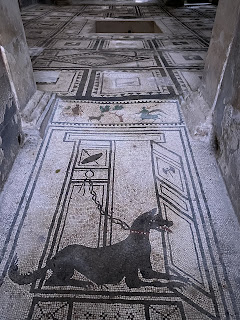 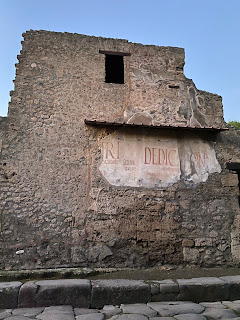 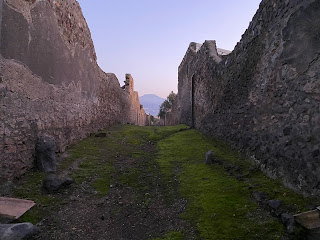