Meeting a Real-Live Angel in Italy

The morning had been a whirlwind of excitement. I went to an Italian laundromat, got a free coffee from a man who owned a shop across the street, and made a couple of friends who were also washing their clothes. I don’t know how, but at the end of the last spin cycle, a young man and I cried over cancer, hardships, and the beauty of fulfilled dreams.

“Go after whatever it is that you want out of this life!” I said. “Don’t wait until you’re almost 40. Because you could end up like me, and it could almost be too late.”

“I’ll never forget this,” he replied.

Mike came in with the kids and didn’t even seem surprised to walk in and see me and this man with tear-filled eyes.

“How was lunch?” I asked everyone as they helped put the clean clothes into their packs.

They’d all gone to lunch and a farmers market while I washed our clothes—the caveat being that we’d visit a famous synagogue in Milan that afternoon.

But later that day, everything seemed against us. We couldn’t get there by foot, a train couldn’t take us, and none of the taxi drivers could fit six people and a wheelchair into their cars. I closed my eyes and prayed. “God, if I’m really supposed to see this synagogue, please send an angel to help us.” It sounded silly, praying for an angel, but God can do anything if it’s meant to be, right?

I gingerly stood from my wheelchair and went up to a taxi driver. He couldn’t understand English or my Italian. So, I’m still not sure why, but I started speaking in Spanish. My mouth fell open when he responded—he’d actually understood every word!

“¿Seis personas?” he asked, and I nodded. Within moments, he’d moved heaven and earth to get us a cab. When I thanked him, he kept talking in Spanish. I wondered what my Spanish accent sounded like to that Italian man. How hilarious!

Anyway, when we got in the cab, I knew the driver was extraordinary. I sat in the front by him, and he explained that he didn’t speak English. Although I could understand him quite well, I couldn’t speak much. Despite that, I somehow explained that we wanted to visit the main synagogue in Milan—one of the most beautiful buildings in the world.

His eyes widened. “Potrebbe essere difficile.” It could be hard. “Ci sono un sacco di polizia e sicurezza lì.” A lot of police stay around the synagogue to offer security.

But we decided to try anyway, and luckily, when we got there, the policemen even let the taxi driver take a picture of us in front of the building!

Our whole trip to Italy seemed life-changing to me, but when I stood in front of that synagogue, I felt the sheer power of God.

Sometimes when I’ve played my violin, I get so lost in the music that I can almost feel God‘s presence around me. It’s so peaceful and intoxicating. It doesn’t have the constraints of religion or bureaucracy. It’s just me and God, a simple being worshipping her creator. And that’s what it felt like standing in front of that synagogue. Emotion filled my eyes as the taxi driver took our picture because I knew for some reason I was supposed to be there. 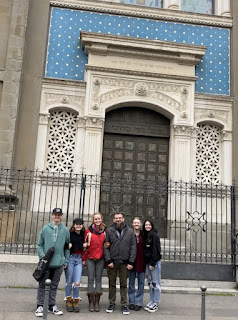 After we got back in the cab, the driver gave us an amazing deal to bring us to our hotel. Mike and I nodded, deciding to take him up on his offer—after all, he’d somehow gotten our picture in front of the synagogue.

On the 45-minute drive, Mike and I spoke with the driver in Italian. He worked with us, helping us understand every word, and this interaction became one of my most treasured memories. We told him about our family, and he reciprocated by sharing stories about his beautiful, accomplished daughters who are truly making the world a better place. The conversation became such that my soul glowed just as brightly as it had in front of that synagogue.

Toward the end of the drive, I absolutely knew we were destined to meet that man. I wanted to tell him I prayed for God to send an angel to help us, but I didn’t know exactly how to say all of that in Italian. So instead, I introduced myself and then asked for his name.

“Angelo,” he said. The Italian word for angel!—and chills ran up my spine. The whole day made sense: How hard it’d been getting to the synagogue. How impossible it seemed catching a train and finding a big enough taxi. 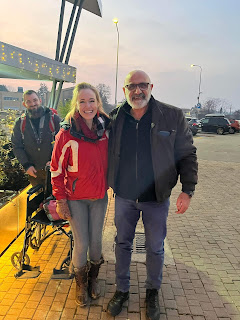 Sometimes when “obstacles” fill our lives, it’s simply an opportunity for God to point us in the right direction.

After hearing his name, Indy gave him a coin with an angel cut out of it. “An angel for an angel,” she said. Then Mike told him all about my ongoing battle with cancer and the fact that friends and family paid for us to go on this trip.

Angelo’s eyes welled with tears. “I am so sorry,” he said several times in Italian. “So sorry.”

When he dropped us off at our hotel, I asked for him to wait just a moment. I’d brought a copy of my memoir, “Two More Years,” to give to someone special on our journey, and I knew it was him. I handed him the book, finding it hard to speak because he’d been so exceedingly kind and given us far more than a simple trip to a destination. And I knew we would never, ever forget him.

Later, I saw that he’d sent me a message on Facebook. He’d told one of his daughters about my memoir, and she’d already begun reading it and translating it to him in Italian! There are times in my life when I look back in complete wonder. I know I’ve had some really hard things happen, like experiencing the death of a child or fighting terminal cancer, but the good far outweighs the bad. I meet the most exceptional people. And just like this taxi driver, I’m so fortunate to have angels all around me. Even when I’m experiencing hard days, feeling sick, and fighting a battle the doctors say I will lose, I know now that I will always strive to remember God’s blessings. It’s easy really because the people God has put in my life are a constant reminder of His goodness and love.

So, that was one of the most beautiful days of my life. I met an angel who sometimes works as a taxi driver, and now that we’ve connected on Facebook, I feel that I have another lifelong friend. Who would’ve thought such a beautiful day would all start with an Italian laundromat?!

Posted by Crazy Life of a Writing Mom at 6:59 PM