Busking to Use a European Bathroom!

“I'm related to the Coglione family," Mike said to the bartender, and the man almost fell over, laughing so violently.
"That means ... testicles," he finally coughed out the words. Then his eyes grew wide as he poured another drink. "Oh! You must mean Colleoni. Coll-e-oni." The pronunciation sounded barely different to my American ears, but apparently, it's pretty drastic to a native Italian. "That sounds close to a well-known mafia family here in Italy. Maybe don't be telling people you're related to them."
The next day, we prepared to visit Trento where the testicl—I mean—Colleoni family hails from. 😉 But transporting a woman in a wheelchair and rousing four people (who are 21 years old and younger) takes time, and we missed our train by two minutes.
Mike parked me against a wall in the Milan Central Station, and the kids piled all of their backpacks around my wheelchair like some sort of pyre. "I'll be back. I think the next train to Trento doesn't leave until later tonight. We might just have to skip it and go straight to Florence."
So, Mike left to get tickets sorted, and about twenty minutes later, Trey whispered, "Mom, I need to use the bathroom."
"Me too," Indiana said.
"So do I," said Sky.
Ruby appeared to be the only one who DIDN'T want to visit a European bathroom.
"It costs money here," Sky said. "A euro per person to use the bathroom. And they have bidets."
Everyone looked horrified. Bidets could be fun, though ... right? RIGHT?
I dug through my pockets and cursed under my breath. Mike had taken all of the money with him on accident.
"Mama, what are we gonna do?" Indy asked. "He might be gone for a long time." 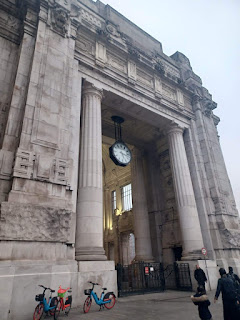 I remembered being a homeless street musician in Hawaii, and the dilemma became fun. "This'll be great. Can you guys put my violin case in front of me?" I'd brought my electric violin to Italy with the hopes of playing it on the streets of Rome, but the biggest train station in Milan seemed even better! 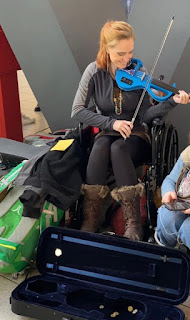 I played the first song that came to mind, "Somewhere Over the Rainbow," and I really had to put my soul into it because although my electric violin isn't a silent one, it's still fairly quiet. I watched as people gathered around and started listening. As the crowd grew, magic filled my fingers and soul, and the words to the song appeared in my head. Yip Harburg's lyrics felt so true at that moment.
I couldn't believe we'd made it to Italy. Despite anything going "wrong," it had a beauty all its own:
"Where trouble melts like lemon drops/ High above the chimney tops/ That's where you'll find me ... Somewhere over the rainbow, bluebirds fly/ And the dream that you dare to, why, oh why can't I?"
At the end of the song, my four kids stared at me with such happiness displayed on their features. "You made money!" Trey said, dumbfounded.
"We can use the bathroom," Sky almost squealed.
And when I looked in my case, I realized we'd made seven euros—even more than expected.
Sky took Trey and Indy to use the bathroom, and Ruby stayed by me. It seemed like missing our train had opened the door to grand adventures!
A man walked past, whistling "It's Beginning to Look a Lot Like Christmas," and I stole the chance to jump in on the fiddle. He glanced back, shocked, and spoke in such passionate Italian.
"Mi dispiace," I said, apologizing. "Io Americana, e non capisco." I'm American, and I don't understand. "Puoi rallentare?" Can you slow down?
"Wait? You're American!" He studied me. "But your smile ... That smile is Italian."
I giggled because Italians are THE BEST. "My mom's family is from San Giovanni in Calabria."
"That makes sense. You're a middle Italian!"
"Middle Italian?" I paused. "Che cosa?" What?
"You're part Italian! My family is from Southern Italy too."
Right before Mike and the kids came back, another man approached Ruby and me. "Your music ... is wow. Bellissima." He kissed his fingers and spread them into the air as if he'd just tasted the best meal in Milan. "But you are brave, signora. You can play over there, away from la polizia. But you chose to play RIGHT by them!" He pointed to the sign not too far from our heads. "I like you." He laughed with such joy. "I do." He flicked a couple of euros into my case and walked away, mumbling. "Musica vicino alla polizia." Music near the police. "Mamma mia!"
So, our second day in Italy was filled with excitement too. We got to eat fancy food in a well-known Italian train station, bought a belt in the fashion capital of the world, played music for the police, and earned enough money to use the bathrooms. Plus, I hope my kids will never forget how we made an adventure out of thin air. I honestly believe every moment can turn into something magical if we just dare to search for the good.
The next day we headed to Florence--and I have to admit that it's one of the best places in the world. I'll write about that tomorrow. 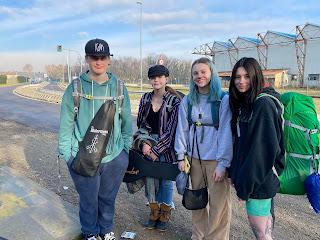