Cade drove up Mosher Lane where I lived. He parked in the field behind my house, and got out of the car so he could help me out.
I trembled inside when he opened my door and took my hand. I wouldn’t kiss him, refused to, but that was a bad place to park. The lane was so private, so utterly concealed that some of my friends would go there and make out.
Cade put his jacket on my shoulders and led me through to a clearing in the weeds.
“You’re so beautiful,” he said. He leaned closer and put some of my hair behind my ear. I got chills, just from a single touch; I couldn’t imagine how wild it would feel kissing him.
I thought of closing my eyes. That’s all I’d have to do and he’d kiss me; hold me in his arms and I could melt away, just like millions of girls had in the same field. I knew it would be worth it. I’d be the one tasting paradise. I’d be the one kissing a handsome guy in the moonlight.
I looked up at him and thought all those things. His green eyes turned to mine, and he slid his hand behind my neck. All I had to do was breathe—close my eyes and breathe. He pulled me closer. My eyes flickered shut, and just before he could kiss me, I stopped.
“Why are you here with me?” I whispered. “We’re so different. You know I won’t kiss a guy until I’ve known him six months. I won’t have sex until I’m married.”
“And you’re worth the wait.”
He pulled me closer. I almost wished he’d kiss me and take the choice away, but then instead of pulling me in for a kiss, he put my head against his chest.
Tears flooded my eyes as I heard the beating of his heart. I wrapped my arms around his strong chest. He held me like that for a long time, rocking me in the moonlight.
He smelled like Old Spice and mint gum—he smelled like home.
I sniffed and smiled up at him. We stayed inches apart; so close his breath tickled my cheek.
I thought it again. All I had to do was close my eyes. That was all. I shut them, slowly willing Cade to take me away.
He leaned down, his breath getting closer and closer, until I felt his lips smiling against my skin as he kissed me on the cheek. “I better get you back to the house,” he whispered.
“Yeah, I guess that’s a good idea,” I said back, hoping he had no clue how hard it was saying those words.
As Cade walked me to the door I remained quiet, wondering: How could Cade make me feel that way? Was I doing the right thing, and why . . . hadn’t I kissed him?

As you might know, I've written three memoirs about growing up, being homeless, and losing a child.  Well, Cade and I decided to go photograph/videotape some of these places.  Every Monday we'll be showing locations where my memoirs took place.

So far, some strange things have happened.

First off, we visited the lane written about in Bible Girl & the Bad Boy.

It used to be named Mosher Lane.  Look what they recently renamed it! 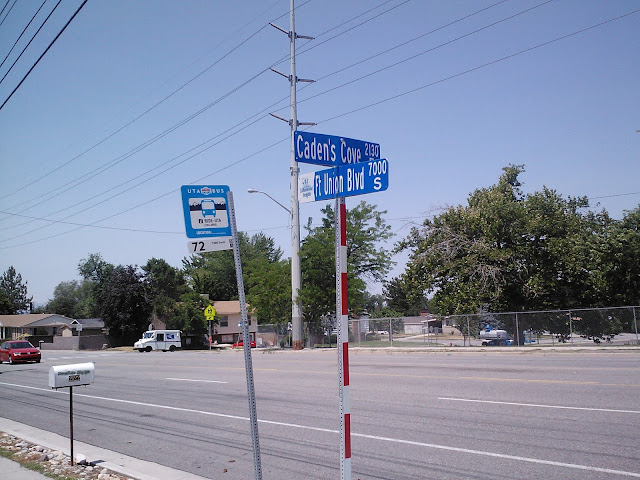 Sometimes life is stranger than fiction!
Posted by Crazy Life of a Writing Mom at 10:43 AM