I Want to be a Princess: An Inspiration

Fran Fischer's book of fairy tales is so well-written--and hilarious--it had me laughing to the point of tears. Have you heard of Gail Carson Levine? Well, she wrote a series of princess books (the most famous one is Ella Enchanted).  Fran Fischer's writing reminds me of Ms. Levine's.  If you've enjoyed Ella Enchanted, or spins on other fairy tales, you should check out Fishducky's Fables.
I'm writing about this today because Fran has inspired my next project, a middle-grade book about a modern-day princess. I've included a small excerpt below.  But first I'd like to share a sample from Fran's recently released audiobook, narrated by Sheila Book--an AMAZING talent!
Enjoy :)

*Now for a peek at my current WIP.*

Once upon a time--last year--an eight-year-old girl lived in a decrepit Los Angeles home. It was the thinnest home known to man, barely reaching twenty-five feet in the widest places. The house consisted of five rooms stacked upon one another. The building had survived through economic booms and downfalls, through the growth, wealth (and stardom) of mankind.  And although the house had increased as an eyesore within the busy city, it had somehow managed to stay erect.  A freeway had been built around it, then grass planted about its perimeter until the five-story looked more like a whimsical median sculpture, than a home to a poor, sad, eight-year-old child.
The girl was named Lily because her hair was as white as Easter lilies in bloom and her eyes were as green as leaves.  Her mother had died years before, leaving Lily and her father with nothing more than each other and the terrible house that no one would buy--not even the city.
Lily's father, Mr. Rusty Pane (as his bungling associates called him), had become burdened by loss, always wearing a sneer while barking orders and wheezing at the worst times. After fully succumbing to selfishness and his regrets of being a single parent, Rusty locked Lily in the highest bedroom and coincidentally the smallest (only ten-feet squared) in all of the house.
Lily had no bed, no dresser, and no mirror.  The child was used to sleeping on hard ground and wearing the same musty clothes day after day. So that was nothing new, but no matter how she tried consoling herself, she simply could not survive the lack of a mirror. Desperate to see herself, having never glimpsed her own reflection, Lily nearly gasped with delight upon finding a tiny two-foot-tall window to the west of her room.
She ran across the slanted floor, and could just make out the reflection's shapely eyes and the dainty mouth resting below a quaint nose, or was her nose mammoth and her lips miniscule? It was hard to tell. The glass wasn't perfectly flat and if she moved slightly, her nose appeared bulbous and her face-shape that of a hammerhead shark.
So as days passed, Lily had nothing to keep her company except cobwebs, the rats that would scurry through her tiny slanted room, or the cars that whizzed past changing shapes depending upon which part of the glass she looked through.
It was during one of these many days that Lily, peering forlornly out her window, thinking the house's bricks had been glued together with melted cheese rather than mortar, spied a clown-like orange car. 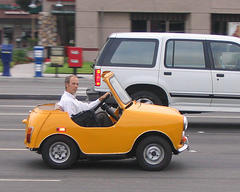 I know this isn't quite "orange." Give a gal a break :)
That particular vehicle didn't continue speeding along the freeway, but instead pulled right onto the grass near the house's front door.  An elderly woman with a hot-pink hairnet and pointy shoes stepped from the psychedelic driver's seat. She adjusted her cat-rimmed glasses, then looked right up at Lily's window and winked.
"Oh my!" Lily gasped and backed away to the far wall.  She stepped over a trap door in the floor and pressed her ear to the wood she'd stood on moments before.  Ever so faintly she heard her father's crass, care-worn voice drifting through the five stories and the five trap doors that led to each room.
"She's not for sale," Rusty boomed.
"Mr. Rusty," a joyful voice cried.
"It's Mr. Rusty Pane."
"Whatever.  I'm not trying to buy your daughter."
"Lily."
"Yes, of course, darling.  Lily.  I'd just like to take her out for a bit."
"Never!"
"One hundred dollars?" the woman asked.
Rusty wheezed for a moment, then coughed. "A thousand."
"A thousand? You better let me take her for a month for that much! Five hundred?" she asked.
"A thousand.  Why do you want to take her anyway?"
"Because, darling, I've seen her looking through that window and I think she's a princess."  Some shuffling took place, and the ruffling of paper.  "I'll only pay a thousand if you let me take her out once a week for two months!"
"That's ridiculous. I don't know you," Rusty said.
"Fine, then nothing."  The front door slammed and the already teetering house shook.
Lily stood up and shot to the window.  She could just make out the woman's still pointed shoes, bobbing under a determined gait and flowery muumuu.  Rusty soon hurtled outside, running after, then grabbing the woman's arm.  He knelt, groveling like a coward.  The woman's left penciled eyebrow rose at the sight.  She then, unzipped her fuchsia purse, handed a thick wad of cash to Lily's father and nodded.
"Eight outings," the woman mouthed, holding up all of the fingers on her right hand and three on the left.  Lily thought the lady's forehead looked funny through the glass to the left.
Rusty shoved the cash into his baggy gray pockets, looking like a black-and-white picture, next to the technicolor woman.  Some cars whizzed past, and Rusty's crudely buttoned plaid shirt swayed in slow motion.  Rusty and the woman exchanged a strong handshake, and then the woman hopped into her clown-like car and drove away.
Lily clutched the windowsill, hoping for the best. She watched, noticing, as the woman drove away, that the car's sole bumper sticker read, "Drive as if Zombies Are Chasing You!"
The front door slammed once again and Rusty yelled up through the five floors, "Lily. Get ready because you're going out with a stranger first thing tomorrow morning."
"Oh, my gosh," said Lily. "Who is that woman? I hope she has a mirror!"
Posted by Crazy Life of a Writing Mom at 5:30 AM