My fifth book was released and so was my obituary

What do you want to emulate?  What will people say about you after you die?

I may not be the smartest, wealthiest or prettiest person around, but I have spunk and I get things done the best way I can.  People may call me quirky and eccentric because instead of swatting flies with a swatter, I spray them with a water bottle.  After they quickly drop to the ground wet, that's when I step on them. 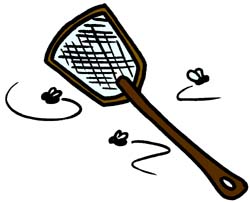 Instead of using a scrapper to get ice from my windshield, I dump lukewarm water on it and all the ice instantly melts away. 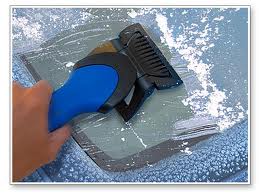 Instead of standing on a ladder to prune bushes, I use the window. 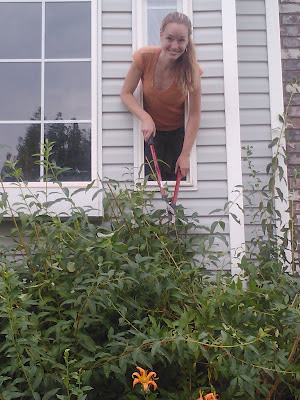 I cool off fast food by holding it out of the van's window! 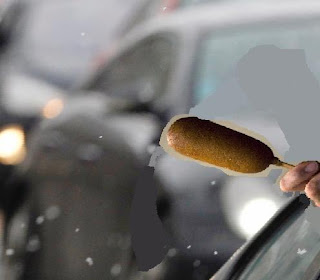 Yes, I suck at photo editing, but you get the point.
This is supposed to be someone holding a corndog out of a car window.

Since we can't afford a trash compactor OR a second garbage can, I solved the problem myself. 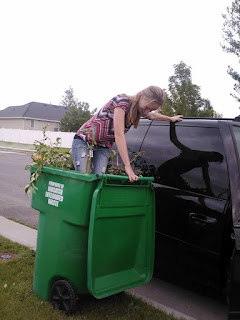 When I get mad at my husband, I think of creative ways to get him back--like the time he didn't unclog the toilet and then found me outside patiently waiting for him like this AND bringing property values down all in the same day.
P.S.  These pictures--which Cade ended up taking--are real and YES, I did have short shorts on--don't freak out! 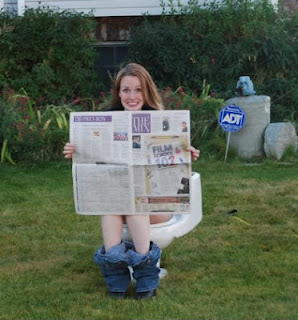 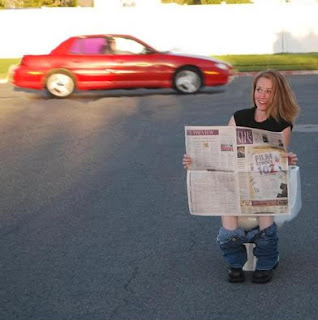 All of these things and more just describe what a creative goofball I can be.  What people don't understand is that I have to do things myself.  I can't afford paying people to do it.  Cade isn't around to help since he's hardly even in the same state.
Instead of sitting around and feeling bad, I've had to think of the quickest, cheapest solution.

You may be wondering why I'm telling you about this.  Well, it's because I thought about what I want my life to stand for.  What do I want people to think when I die?  Well, if I can prove one thing through life, I want to show people that they can do anything they put their minds to.  I don't care how many excuses they make saying why they can't do it--it's time to start thinking of ways to accomplish your dreams.
I wrote my first book The Golden Sky over ten years ago.  It took years and years to go through the publishing process.  People said I couldn't do it--I started agreeing with them.  It wasn't until after pulling myself from the dumps that I started thinking of ways I could make my dreams come true.  Now I have five books out!  And I'm thrilled to tell you that the fifth one--a silly nonfiction anthology--came out today.
Just more of my antics . . . AND how they seem to get me in trouble with people, constantly. 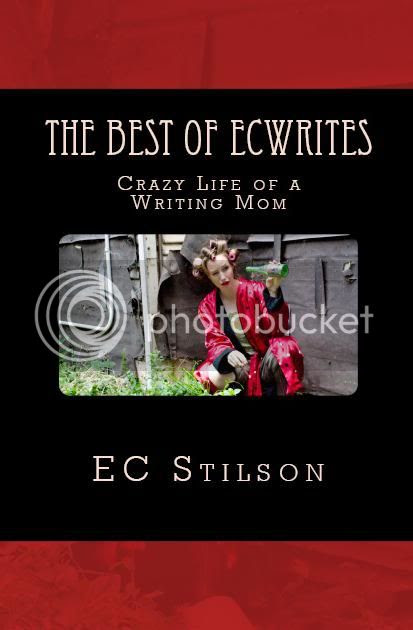 Do you have a dream?  Is it time for you to stop thinking of reasons why you can't and think of why you can?
When I die, I hope people won't just remember the silly things I did or why I did them.  I hope they'll remember instead what those actions stood for.  And that is this:  Anyone can accomplish great things--they just need to try.  And I hope that's what they'll put in my obituary, right next to the picture of me on the john!

Signing off,
The proud author of FIVE BOOKS.  Yahoo!
Posted by Crazy Life of a Writing Mom at 4:30 AM