How to be Happy

The Key to Happiness

The kids each gave me a note, explaining how happy they are that I'm still alive, and I sat stunned, thinking about it days later. Despite cancer and feeling sick 90% of the time, I truly have everything. But the lady venting at the table across from mine felt far differently. "I'm just so miserable," she said to the woman who ate with her.

I didn't mean to eavesdrop, but Sky had gone to the bathroom (which appeared to have a massive line), and for some reason, I couldn't stop myself from listening. "We don't have anything." The brunette pouted. Her beautiful sweater glistened under the restaurant's lights, adding a bit of glamour to the joint.

I didn't want to hear this, so I shoved some fettuccini into my mouth and had to chew for a million years. Something bizarre is going on with my throat lately, where food gets stuck and won't go down. I've lost ten pounds because of this, and doctors plan to conduct a "swallow test" next week. They aren't sure if it's a complication from multiple intubations during surgeries, a side effect from radiation, or--something much worse--a sign that the tumor in my neck is growing...

"If he worked harder, we'd have a bigger house."

"I know, honey. He promised you so much," the gray-haired woman responded.

"He only makes $100,000 a year, Mom! What would it be like to marry someone who actually makes good money--like Dad? I'm so miserable. I should've married Tom."

"Check!" I waved down the waitress. After being diagnosed with cancer, I can no longer tolerate certain things. Sky had finished her food, and I figured I could wait for her in the lobby.

The waitress came over. "It's already been taken care of."

"What? Someone paid for our food?" I asked, and the fancy ladies stopped talking.

"Well," the waitress shuffled, "I did. Ruby is your oldest daughter, right?"

"She does my tattoos, and she told me about you and your fight with cancer. So...I've been following all of your stuff online--I'm not a stalker or anything, but what you write cheers me up. And that's why I paid for your food."

"But you're the waitress--we're supposed to pay you." I couldn't believe her generosity. "And," I knew I beamed, "you read my stuff?" I felt so happy I could hardly contain it. "That totally made my day."

"I'm...I can't imagine what it must be like, having doctors tell you you're dying. But it's so good to see that you're out, still trying to enjoy life while you can. You're so inspiring."

Sky came out, and we left the waitress a really fantastic tip. As we walked from the table, I noticed the fancy women staring at me thoughtfully.

So, I met two people that day who confounded me: The first was the brunette, and the second was a homeless man.

I've been doing extraordinary things with each of the kids, and I've noticed that my efforts have paid off. Even if we're sharing a meal at the diner, paying to see a dollar show, or braving the town's new escape room, the kids and I have gotten really close. Sky talks about her daring travels, Ruby shows me the dozens of tattoos she's designing, Indy talks about being a lawyer (someday), and Trey raves about music.

After Sky and I got home from lunch that day, Trey and Indy asked if they could visit the music store. But halfway through our time perusing guitars, the fettuccini I'd eaten earlier tried making a comeback. "I'm gonna step outside," I told the owner. She sees us weekly and nodded with understanding.

So, I stepped outside and hoped the cold air would banish the nausea from my body. Not directly out the door, but a few feet away, three rough-looking men stood talking. "God is so good," the tallest man said. He wore a beanie, a scarf, fingerless gloves, and a massive beard. "Being homeless was the worst experience of my life, but now I see that it happened for a reason."

I took in a big breath, grateful that the sickness had momentarily passed. Then I dug through my pockets and found a $5 bill. "Um..." I walked up to the men. "Maybe you can use this?"

The tallest man nodded, and I couldn't help smiling. His skin crinkled with age, but his eyes shone with such joy. His grin could've lit a thousand fireplaces. Plus, I've been working on a novel about pirates, and that old man would make the perfect captain of a pirate ship. "How's your day been," I asked, leaving all of my previous worries about cancer. Who can worry about throwing up when they're talking to a genuine pirate?!

"It's cold," he said, "but God's in it. And He makes it beautiful." He seemed so happy, not just feigning contentment but genuinely grateful.

"You have a wonderful day, Miss," his first mate said, little clouds billowing from his mouth as he spoke into the freezing air.

When the kids and I got home, I had to mull over the day. What was the difference between the disconsolate brunette and the content pirate? How could someone with nothing be happier than someone who had everything?

I decided the difference is gratitude.

I hope you'll remember this as you enjoy dinner with your family and friends today. Whether you're experiencing grief, loss, sickness, financial trials, or any other hardships, I think it's important to realize that true joy comes from gratitude. I'm always talking about "finding the good" because it helps us access what we have to be grateful for.

Today I might be sick, and life might be a bit scary and hard because I know how I'll die; I just don't know when it'll happen. I'm tied to the tracks, waiting for the train...

But despite that, I'm grateful to spend another Thanksgiving with my family. Looking back at my life, and after thinking about the brunette and her plight, I'd much rather be like the shaggy homeless man. At least he knew that no matter our circumstances, we can always fight to appreciate what we have. Life is a gift. We should be grateful that we're here for even a second. 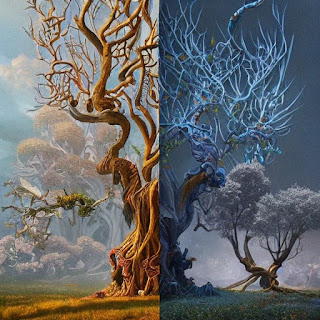