I Refuse to Give Up: Happy Birthday in Heaven

“I love seeing you this way,” I told my grandma. We sat in her green room on a semi-modern couch she’d just designed. “Other people have had dreams about you too.” I fumbled with my hands in my lap, letting them fall over one another like water. Several of my cousins have had similar dreams—with shocking similarities to mine. “Well…I’m glad you’re doing okay. It’s nice of you to keep in touch.”

She laughed, even happier than when she was alive.

“With how often I dream, how come I hardly see Zeke?” I repeated the same question I’ve asked her numerous times over the years.

“It would be too hard for you to see him. If you knew how amazing it is here with him and all of us—without pain—it might be hard for you to stay where you’re at. It’s surreal what happens once you see the big picture. It makes everything worth it.”

“I read something strange the other day.” I studied the clock on her wall and realized it remained stuck at midnight. “It said the reason life is hard, is so we can fully appreciate the afterlife. That bothered me.”

“Well…I don’t like when people try to justify pain. Maybe that’s like trying to justify nature. Isn’t it fair to say that some things just ‘are.’ We all die. Pain is just our mind’s way of keeping us alive for as long as possible—so we don’t hurt ourselves and die. Does that really make us more appreciative of the afterlife? Maybe pain doesn’t exist in Heaven because we no longer need a mechanism to prolong our own deaths.”

She went to respond, but my alarm resounded, and my grandma…vanished.

Since my battle with cancer began, sometimes it’s strange waking up. I don’t always expect to be sick or in pain, and some days the pain blindsides me because I want cancer to be the dream NOT the reality. Today was different though, and for the second day this week, I actually felt “normal” for a few hours. Maybe even healthy.

“Are you doing anything different?” he asked.

“The doctors just switched my medications. Maybe that’s it. How strange though to feel like this today…. It’s like some sort of gift. You know it’s Zeke’s birthday?”

My first son, Zeke, would’ve been 20 years old today. It’s unreal to think two decades have passed since his birth. “I can’t believe that at the age of 19, I’d already had two kids… It was so hard to take Zeke off of life support.”

“I’m sorry, Elisa.” Mike hugged me. “I still can’t even imagine what you must’ve gone through.”

“It was harder than anything. No one wants to see their child in pain. And no one wants to face ending life support for their own kid.” 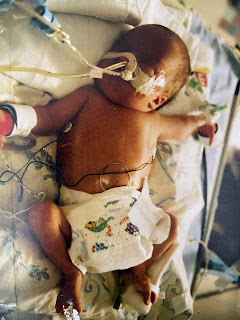 I thought about how much life has changed since this day 20 years ago. A good word for these decades would be “perseverance” because there have been some tough times, but somehow we’ve always made it through, and I’ve tried so hard to remain strong for my children.

I wonder what Zeke would think about everything: how the book about him, “The Golden Sky,” became a bestseller—not because it’s a literary classic or some great read, but because I wanted my son’s memory to live on… How I’ve tried so hard to tell his siblings about him... How I’ve missed him EVERY single day since he died…

I’ve always felt that he’s had a front-row seat to my life, watching my choices and rooting for me. I know he does the same for the rest of our family too because he knows how much we still love him—and he loves us too.

I kept thinking about Zeke on his birthday, wondering what he’s thought about my journey, especially with cancer. I wonder if he could give me advice, what it would be. It’s just been so hard to stay strong and keep going. There have been many times when the pain has seemed almost unbearable, and I’ve contemplated stopping treatments. Even now, understanding that I require certain infusions for my bones several times a year… The reality of my new life can be daunting. Yet, when I have mornings like I did today, when I catch a glimpse of health, I’m so happy to hang onto that feeling even if it’s only for a moment.

As I thought about all of this, my eyes fell on a gift a friend gave me earlier this week: affirmation cards that I’ve already begun using daily with my kids. Every day we pull a card and read it to each other. “I am strong,” Trey read the other day. “And you got ‘I am unique,’ Indy. That really matches you.” Indy beamed at her brother’s words.

So, after feeling somewhat prompted, I grabbed the deck and truly wondered what kind of advice Zeke would give me about cancer. I shuffled, thought really hard, then grabbed a card toward the bottom of the deck. When I turned it over, I had to shake my head in wonder. It didn’t say “I am strong” or “I am unique.” Instead, it said something that I’ve actually quoted to myself on several different occasions. I might not be the bravest or the wisest or the prettiest or the most talented person…but I do have tenacity. And I keep going even if I’m crawling along the ground, with everything against me except the ability to fail. I read the words over and over: “I refuse to give up.” 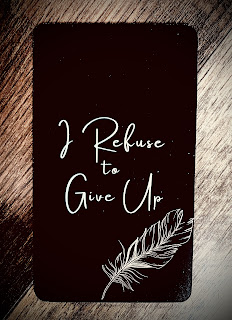 Maybe that’s what he would tell me if he could: to keep fighting. If so, today I got the message loud and clear.

“Happy 20th birthday,” I said out loud to Zeke, and slipped the card back into the deck. I sure hope he likes the afterlife. If it’s allowed, I’d really like to bring him fishing in Heaven someday. It’ll have to be catch and release since the fish don’t die up there though—unless my kind of Heaven is actually hell for fish.

Anyway, today was a reminder that I’ve fought too hard to just give up when I’m finally starting to see a little bit of hope. Who cares that I need to keep getting bone infusions. They probably just missed me too much at the hospital. Plus, when I look back at everything I’ve been through, I’m a lot stronger than I give myself credit for, and a good chunk of that is probably because I have a cheerleader in Heaven.

I love you, Zeke. Please know that all of us miss you. Happy birthday.

Note: This affirmation deck is seriously one of the neatest gifts I’ve ever received. If you’d like to check them out for yourself, Nevermore Designs has a Facebook page here: Nevermore Designs.

Posted by Crazy Life of a Writing Mom at 4:43 PM