If you’re worried about dying before your time, please read this.

“This is the most beautiful funeral,” I thought to myself. The vaulted ceilings loomed above us, and a disembodied voice floated so angelically that I closed my eyes, soaking in the sounds of Heaven.

The hymn ended far sooner that I’d hoped, and my gaze fell to reality: the casket laying only a few feet in front of me.

“We all die,” a Filipino priest said, his accent adding a hint of urgency. “You will die… I will die.” His eyes implored the crowd. “Emma lived to be a good age: 93. Such a long life. Not many people can say that.”

I swallowed. Emma—my husband’s grandma—hadn’t just lived to the age of 93. She’d made it to 97. How could this man make a mistake like that at someone’s funeral? But before I could think anything else, words popped into my head: There are NO mistakes.

No mistakes?! Now there’s a cliche I’ve never subscribed too because I make more mistakes than anyone I know, like going to tanning salons—and getting melanoma. I glanced at the coffin again. I’m only 39, THIRTY FREAKIN’ NINE… but doctors have recently said that in less than a decade, I’ll be in a box like that too. Six feet under.

“Look at this box,” the priest said, and I felt my eyes widen. Could this guy read English, Tagalog, and minds? “Some day each of us will die. But whether you make it to 93…” then he decided to invert the numbers for extra emphasis, “or 39…”

Chills ran up my arms. Of all the numbers for him to pick 1-100, had he seriously mentioned mine? I reached over and grabbed my mom’s hand. She sat next to me in the pew, just as stunned as I was.

“Yes, whether you’re 93 or 39,” the man repeated, “and you’re facing death, that’s okay. As long as you’ve lived a life of service and loved others, it’s okay to die.”

Tears filled my eyes. I’ve never—in my life—heard someone say that it’s okay to die. And since this journey began, I want to triumph…to win. But my battle is rigged. And it’s terrible thinking if I don’t make it past 40 or even 50, I’ll be some sort of failure because I wasn’t strong enough or valiant… If I’d just been more positive... Had more faith… Damn it. If I could just be MORE…

“My 31-year-old brother was just ordained in September but died two weeks ago after suddenly having a heart attack.” He paused, looking at the crowd. So much emotion filled his face that I felt his pain and found it hard to breathe. A sudden pressure in my chest compounded each of his words. “Every one of us will die. So, when YOU leave this earth, how many people will come to YOUR funeral? How many people will sit in these pews, mourning the loss of your presence because you helped THEM?” His voice heightened. “How many?”

At the end of the funeral, I told the priest how much his message had impacted me and my entire family. “I have melanoma,” I said. “There’s no cure, and doctors say I’ll die from it. Your words spoke to me, especially when you said ‘whether you’re 93 or 39.’ I… Well, I’m 39.”

He seemed a bit taken aback. “What’s your name?” he asked.

At the lunch after the funeral, one of Mike’s amazing uncles asked me what I thought about the sermon.

“It was a bit life-changing for me. I know that’s a huge claim, but it’s true. You know I’m fighting cancer.”

He nodded and his girlfriend came over to hear what I had to say.

“Everyone tells me not to say negative things. To never say it’s terminal. To never admit that it could kill me.” I sighed. “But doctors say it will. And I think it would be completely idiotic of me to live in denial. I need to really treasure each moment, but there must be a balance between happiness and facing my own mortality. I have to wholeheartedly enjoy the present despite my circumstances.”

“I worked with aids patients over 30 years ago. I remember them telling me this same thing. Their views changed my life, so I know exactly what you mean.”

I nodded. “That’s why the priest’s words meant so much to me.”

He smiled a bit sadly.

“He made dying okay. I want to live, but when it’s time for me to go, I think I’ll have a bit more peace now. It’s okay if I have to die young—if it’s God’s plan.”

His girlfriend’s eyes turned up to me, stunned.

So Mike and I left with the kids and drove back to Idaho. I had a niggling feeling that either God or Emma had helped prompt the priest to mention my age and that it’s okay to die when it’s our time because unlike what a lot of Americans believe, sometimes death is acceptable. Death is a part of life. It’s not something to fear or be terrified of even if it is the final conclusion to a terminal illness.

Instead, after battling long and hard to make a difference, death is something meant to be embraced—when our job here is done. I know that’s why I’m not so sad about Emma. She lived and loved well. She fought hard to make a difference during her time here. And even throughout her funeral, I think she tried sending comfort to others. I’ll never forget today or the words the priest spoke. It’s amazing to have peace after all this time.

I feel validated that I’m trying hard enough. Death is okay. And somehow…someway, everything happens for a reason even the time we leave this earth. And, you know what, whether we’re 93, 39, or actually 97, that’s all right with me.

Rest in peace, Emma Magagna. I am so sorry we never got to give you those earrings you wanted. I sure hope they have the kind you like in Heaven. 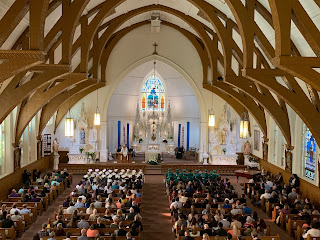