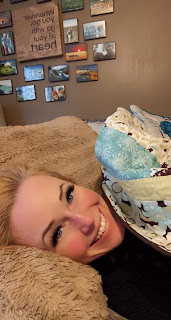 I’m in bed. The last week has been pretty harrowing. It started with a new infection and progressed to a fever. But there’s so much to be thankful for, like the fact that doctors gave me antibiotics and let me stay home.

“You need to take it easy,” Mike said earlier today before heading to work.

“I’m doing my best, but there’s so much to do. I just don’t want to miss a second with you and the kids.” That’s the weird thing about being given an expiration date, even if I have eight more years…10 more years…more or less, I don’t want to take a moment for granted. When the kids aren’t at school—and Mike’s at work—I’m with those goofballs, being silly, cheating at board games, cooking, playing music, and having a blast. When Mike’s home, I just want to show him how much I love him. I guess that’s so important because I want him to always remember…

“Yesterday I taught Trey and Indy how to make egg noodles,” I told Mike. “They got flour all over the dog.” I broke out laughing. “You know, Trey said he wants to open a restaurant with his best friend when he gets older. He said,” I paused for effect, “he wants to open it with you.” 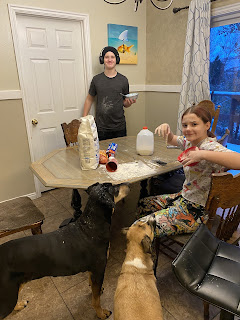 Not long after that, Mike left to work. I hunkered down into bed like I do every day, and I thought about what a regular weekday looks like for me. Mike and I wake up early to make the kids breakfast (usually avocado toast for Indy and some kind of massive thing for Trey—what a teenage boy!). Then I edit articles for a few hours (once I found a man who got arrested for problems with “addition” instead of “addiction” and that made MY WHOLE LIFE). Right after work, I usually get to visit with Ruby and Sky—those two girls completely light up my world because I’m so proud of them. They both recently sent me letters explaining how happy they are that I’ve made it beyond the two years that doctors originally gave me. “Thank you for being the most wonderful (and magical) Mom and best friend out there,” is a line that brought full-on tears to my eyes. Anyway, right after Mike leaves for work, I go to sleep. It’s embarrassing to admit, but I sleep from the time he leaves until Trey and Indy get out of school. And then the three of us spend the night doing homework, playing music, and cooking.

It’s wonderful really, but there are tough things too. Like today. While resting in bed, I tried so hard not to throw up. Certain tumors hurt like a mother f—, I guess they say bone pain is the worst for a reason. The one in my left hip, for instance, makes it feel like I’m lying directly on a jagged rock (talk about the princess and the pea—it’s so dumb). But as I snuggled into the blanket that I got for completing two years of cancer treatments, I found it so hard to be truly upset, even about the pain.

Mike put pictures of our travels (from before I got sick) above our bed. I studied them today and smiled thinking about what an amazing life I’ve led. From us swimming in bioluminescent waters to Mike shaking hands with an actual crocodile in the wild to skydiving with our family, I am so fortunate to have had so many fun times.

I told myself I should’ve been sleeping, but my eyes wandered around the room to our trees outside the bedroom window. I spotted what I’ve seen dozens of times—yet it’s never hit me like it did today. All of our trees are still thick with leaves. Some are mint colored, others are emerald, and my favorites are orange. But winter has finally come before the trees could prepare, and so each leaf bears a burden of snow.

It struck me how the leaves aren’t ready to fall off yet. And so they’ve cupped their treasure of glistening flakes, and the reality of it made me sigh. Because right now I feel like these trees, totally unprepared for the winter of my life. My leaves haven’t fallen, I’m only in my 30s, yet I’m carrying my burden, trying to make it look like a weight of diamonds instead of something cold and unforgiving—something that threatens to steal my life.

Yet, there’s so much beauty. I appreacite everything more now. These cooking classes don’t just showcase delicious family recipes—they’re a legacy. Dates with Mike aren’t just fulfilling—they could someday be a treasured view of the past. And letters from my oldest daughters are so much more than words—they’re proof of a bond that I know is stronger than time…stronger than death. That bond is one of the most powerful things in the universe: the tie a mother has with her children.

So, I need to remember this when someone asks “Why is it still so hard?” or ”Why aren’t you facing the reality that we all die?” Or even “Why aren’t you focusing on the good instead of saying you might not make it?”

Because this is MY journey, and I’m proud to be feeling every bit of it—and sharing that with you. They can take what might help them, and leave the rest. What matters before all of my leaves are gone and winter has taken everything, is that I’ve shared love and really lived.

Looking out that window, tears blur my vision for just a second. Those trees are so damn beautiful. Although winter came before they expected, they’re going out with grace.

It’s amazing how different the world looks on the other side of disease.

Posted by Crazy Life of a Writing Mom at 6:05 PM