What Makes a Life Significant?

“We’re here because of who you’ve been to us,” the man said. He wore oil-stained coveralls and a grin that could light up a power plant.

I thought then about a question that’s been plaguing me since this damn journey started: What gives a life significance?

“What do you mean?” I asked. The line at Barnes and Noble almost went out the door, and I could hardly believe so many people had come to see me. I turned to the man imploringly. “YOU have been such a blessing in my life. Who have I been to you?” He’s the greatest guy, always so witty and fun. He even made us jerky one year and shipped it across states so we’d have something exceptional to eat for Christmas.

“We worked at Kellogg’s together,” he said. “And every day you’d say ‘hello’ to me—every, single day. You were always happy to see me. I loved walking past the front desk because it became one of the best parts of my day.”

“Anyone would’ve been excited to see you,” I said. “You’re one of the good ones. Hearing how hilarious you are was one of the best parts of my day too. As a single mom … life wasn’t always easy, but you made my days at work better.”

Tears filled his eyes, making him blink hard and sniffle. “You made me feel like I mattered.”

As the day continued—and we actually sold out of books—I couldn’t shake the man’s words. And then it hit me, how strange these signings have been. I’ve seen people from elementary school who helped form who I am. I’ve seen old teachers and amazing people I’ve fiddled with in bands. I’ve made new friends who read my posts and have connected with me on a completely surreal level because we’re fighting cancer together or have known others who have. I’ve reconnected with amazing cousins who I wish I could’ve spent more time with when I was younger. And I’ve gotten to see other family members who have made such a huge impact on my youth that it’s lasted a lifetime.

The next day, Trey and Indy asked (since we were in Utah) if we could go to Zeke’s grave. It’s looking pretty sad there, as if no one has visited in a long time. “Will it always be here?” Indy asked.

Mike had gotten a pair of scissors out of the SUV, and he started trimming around the headstone where weeds and grass almost covered Zeke’s name. “It won’t always be here,” I said. I’ve heard that sometimes they remove the graves to make room for new ones after 100 years. It depends on the cemetery and who is buried there. If someone is really famous, they usually keep the grave undisturbed.”

The kids looked really troubled by this.

“Half of Zeke’s ashes are at his grave and half are sprinkled in a canyon. It doesn’t really matter about the grave because he’s always with us.”

“I want to always be remembered,” Indy said.

At this point, Mike had finished working on Zeke’s headstone and had started working on the headstone to the right because a couple of huge weeds grew there too. After he finished, Trey looked so sad, “Can’t we do that for all of the headstones. Some of them look so bad.”

He’s such an empathetic, kind 14-year-old. I love how much he cares about everyone, even the people who have gone before us.

After we got into the car, I kept thinking about how strange it is that a century after our deaths everyone who really knew us will be gone too. We’ll only be a memory. And if we haven’t done something notable enough to become famous, then well …

I told this to Mike and a couple of dear friends. “So what makes a life significant?” I asked seriously. “Unless it’s a historic gravesite, there’s more room at the cemetery, or someone becomes famous, their grave might be reclaimed to make way for the future. The dead can’t advocate for themselves.”

We talked about this for quite a while. And I thought of the signings—about what a huge difference all of those people made for me not just at those events but throughout my whole life. I don’t know if they realize how much of a difference even the small actions have made. They’ve helped mold me—and kept me strong through surgeries, barbaric treatments, liver failure, and so much more. The common thread with significance seems to be how an act helped another and is remembered. 100 years after one’s death people no longer “really” know what someone was like, but what keeps the memories alive is how the notable acts STILL make us feel.

This is all speculative, and what’s ironic is that I don’t even want a grave. I just want my ashes spread somewhere that means something to my family. But for everyone who has supported me and shown such generosity of heart, it’s meant the world to me. No matter how long I have to live or how long we’ll be remembered by anyone else, for as long as I have cognition, I will be grateful to the people who have been so kind to me—they have made a significant difference. They have mattered to so many.

So I’ve begun to think about all of us as what experts say to be a culmination of our experiences and feelings. But really, making other people feel valued—as so many have done for me, especially at these signings—that is the best anyone can do. I just hope that everyone in my life knows how special they are. For all of the experiences in my life, the good and the “bad,” I am so grateful. For the next century and beyond, I am the luckiest. 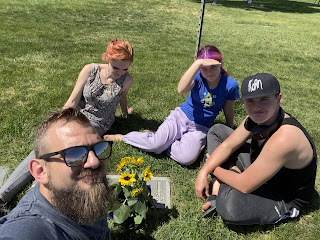 Posted by Crazy Life of a Writing Mom at 1:29 PM