How to Get Your Book in Bookstores 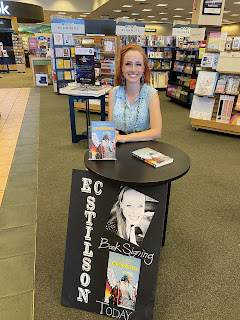 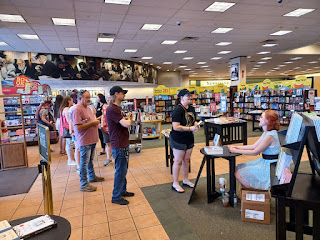 As I did the dishes today, something amazing happened. I heard Mike talking on the phone. He has a low voice that draws you in and somehow makes you want to hear more. But he is also so hilarious that you can’t help grinning despite how hard life can be.

“So, you’ll carry the book?” he asked, then paused for a moment. “Oh, no—I’m not the author. My wife wrote the book. I just want her to really feel this kind of success. You know, she sold 34 books at her last signing. You should’ve seen how happy she looked. And that…well, it made me happy.”

I’d been wiping off the counter, but I stopped mid-swipe because my breath had caught in my throat. If everyone on earth could have their own Michael Magagna, our world would be a better place. To have someone who always sees the best—even when I’m at my worst. To have someone who has loved me whether I’m bald, hurling in the toilet, or crying because “I’ll always feel sick.” To have THAT man in my corner…to make me try harder and do better. Well, it’s honestly made all the difference.

Mike hung up the phone and called someone else. “Yes, hello,” he said, “I’m calling to have a book added to your inventory.” I crept forward as I listened, trying not to seem obvious. But I’m too curious for my own good, and if I had family in the mafia, I’d probably get whacked for being so nosy.

Mike saw me, grinned, and motioned for me to come forward. “Yes, that’s the correct ISBN. Oh, you will?” His finger tapped on the table. “Wonderful. Two copies will be great!”

“What are you doing?” I asked after he hung up.

“Well…” Mike said. “It sounds like 17 stores across the Western States are going to order copies of your book.”

“What?!” Tears came to my eyes. I crumpled into his lap and threw my arms around his neck. “Mike, why are you doing this?”

“I just love seeing you so happy.”

I set down the dishcloth that I realized I still held—near his face. Poor guy. I married the king of hearts and he married the ace of maids.

He snorted. “I’m the only publicist you’ve ever had.” And after he left to work, I honestly felt dumbfounded that he’d called so many stores.

This reminds me of when people have asked why I’m getting better. “What are you eating?”

“Taco Bell and energy drinks,” I’ve replied. “What I think makes a bigger difference is my medical care and all of the support I’ve received from so many people—especially my family. They’ve kept me strong when it would’ve been easy to stop fighting.”

I’ll never understand why I’m so lucky or why people have shown kindness and prayed for me. Sure some downers have said I’m incredibly “unlucky” because of my health problems, but they’re wrong. I’ve had the most wonderful experiences and seen such kindness. Through this journey I’ve witnessed the best of humanity every single day. I’ve made a conscious choice to find the good, and I’ve found more than I ever could’ve dreamed of.

Plus, now my book will be in 17 stores across the Western States! AND I have a sexy publicist. What more could a girl ask for??? This is amazing 🤩

Posted by Crazy Life of a Writing Mom at 4:27 PM