Before Mike and I even got married, we made a list of things we wanted to do together. It’s not really a bucket list, but it’s close. Anyway, among several things including “visit Italy” and “go hunting,” we wrote “skydive together.” I’ve been before, but I wanted something different—where I could stand on part of the wing of the plane!

We thought about it, but of course life and work got in the way. I kept thinking I’d do this or that when the kids got old enough… I saved everything for “tomorrow.” And then time stopped.

Cancer has taken a lot from me since 2018, and I’ve tried to settle in to the fact that there are things I just can’t do anymore.

But when our epic daughter, Sky, told us she wanted to skydive with the family for her 18th birthday, I really wanted to go. So I called several places around Pocatello. A woman in Utah made me cry. “You have cancer. You could put the instructor in danger!” She even went on to use the word “selfish.”

I tried changing the subject. “Oh. Well… No worries. Um…I won’t go. But how much is a down payment for my two oldest daughters and my husband?”

She wouldn’t drop the subject. And I finally interrupted her monologue. “Enough,” I cried, sobbing almost uncontrollably. “I’m still f-f-fighting cancer. I don’t need this! You have n-no idea what I’m dealing with…or what my exact situation is like. I already told you I won’t go.” And I hung up the phone.

After taking a couple of days to calm down, I tried one last place: Sky Down in Caldwell, Idaho—almost four hours away.

“We help people who have cancer quite a bit,” the woman said on the phone. “It’s a pretty common bucket list item.”

I still worried because among other things I’m always so nauseous from cancer treatments. The last thing an instructor needed would be throw up hitting their face at terminal velocity!

But the lady on the phone, Denise, was so kind. In fact, when we got to the place this weekend, the instructor went over several things, explaining how if anything went wrong he would roll with me so neither one of us would get hurt. He’d strap me tightly to him, and we would land sitting. I couldn’t believe it. My dream of going skydiving with Mike would come true, but more than that, we would get to experience this with our two oldest daughters (Ruby and Sky) while our two youngest kids watched. It would be incredible.

And it was! Skydiving a second time was totally different from the first because I got to enjoy it with Mike and all of the kids too. I absolutely loved seeing their joy as we watched each person land and while Indiana and Trey cheered everyone on even saying, “The Sky is falling,” when Sky did her jump.

Unfortunately, my right leg unexpectedly gave out when I tried to lift it before landing, and several seconds before hitting the ground, my right leg drooped at an angle, caught on the dirt, and forced us to pitch down. Fortunately, the amazing skydive instructor—who speaks about a million languages and is so witty—rolled to keep both of us safe. “Oh, my gosh!  Are you okay?” I asked after we stopped moving.

“Are you kidding?!” he said. “I’m totally fine. I do this for a living. I’m just worried about you.”

After we got back to the hanger, when everyone had completed their jumps, I talked with Denise and discovered some pretty profound things about Sky Down. They have helped so many people accomplish their dreams—people just like me.

I gave Denise my book, “Two More Years,” a huge hug, and the biggest smile. “Thank you so much for making this a reality for me. Doctors are starting to say I might actually beat this. But regardless,” I looked over at the skydive instructor and the pilot of the plane who both sat near the front entrance, “you’ve given all of us a memory we’ll never forget for Sky’s 18th birthday. You’ve made it so special.”

And to think, they’ve done this for so many other people. It’s astounding.

Today as Ruby smiled, talking about how much she loved free-fall, and Sky beamed looking at how they caught her E = mc2 tattoo in a photo of her plummeting next to the moon, I couldn’t help feeling the happiest I’ve been in a long time.

Sure I’m still fighting, nauseous from my monthly treatments, and a bit bruised from learning how to ”stop, drop, and roll,” BUT I’m so grateful. I’m still alive. And I get to be experiencing so many miracles each day with my adventurous family.

Who cares that I didn’t stick the landing? I got to go skydiving with some of the best people EVER and all of us lived! 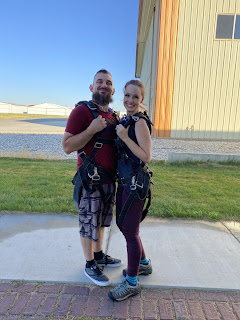 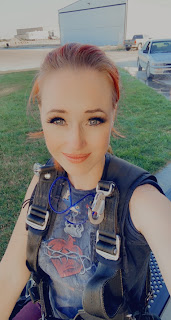 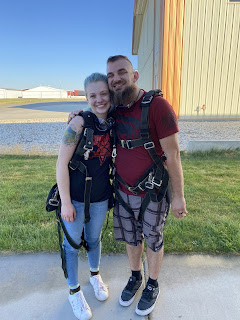 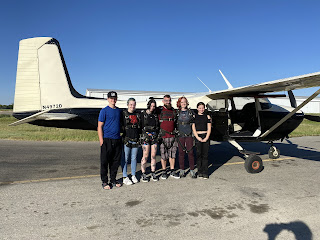