Too Short to Not Have Fun

Trey finally went to infusions with me—since he’s 14 now. “They’re putting that entire bag of medicine into your arm?” he asked, involuntarily shivering.

“Well, this one and then another one.” I smiled, trying to put him at ease. “It doesn’t hurt. It’s just cold. And then in a few hours it makes me really, really tired.”

“Anything else?” His eyes grew wide. “Anything at all?”

“And a little nauseous.” Trey is such a tall, strong kid, but I know he cares far more deeply than he wants to show. “Don’t worry about that though. I want to read your future.”

He snorted and shook his head “You brought a deck of cards?”

“I can’t believe I even asked that. Of course you did.”

So, after a touch of drama, I pulled out three cards from my regular deck and placed them on the hospital table that spanned the space between us. “These represent your past, present, and future.” I spoke in my best British accent. “Your past was fraught with challenges. Oh, my!” I gasped. “You’ve overcome sooo much. You have the heart of a warrior and the will of a saint!”

At this point several cancer patients and their families actually stopped what they were doing and looked at us. A male nurse even came over and folded his arms. “This outta be good!” he said.

I hadn’t expected an audience. I’d just wanted to distract Trey from his worries about my treatments.

“Um…,” I fumbled, and Trey chuckled, realizing how many people watched us.

“Your present,” I cleared my throat, “and future are intertwined.” I flipped over a four and five of spades. “Oh, no! Not this.”

“What is it? What do you see?” he asked, and I wondered if he just placated me.

“You’re right—she’s NOT a girl. She’s an older woman. With no teeth.”

Trey crinkled his nose, and at this point, the nurse who had continued watching us, broke out laughing.

“It’s not funny,” I said, shushing him. Then I turned to Trey. “She will come into your life and teach you many things.”

“When?” Trey asked, actually on the edge of his seat and completely forgetting that he’d previously been worried about the IV in my arm moments before.

“She’ll come into your life within a week! And you will learn so much about math.”

Something dawned on him. “Mom, I start high school next week.”

“What are the odds?!” I started giggling so hard. “Beware the toothless, old teacher! Algebra. Geometry. Poor dental hygiene!”

A little while later, Trey walked off to the bathroom and a couple of nearby people told me how cute the “card reading” had been. It’s interesting getting infusions because you never know who might be your neighbor and what you might end up getting to visit with them about—or who might be listening!

“We have to make things fun,” I said to a fellow cancer patient. “It’s hard having to be here so much, but…being silly makes me feel like I have a little control. I get to choose how I respond to my situation.”

“I needed to hear that today.” She smiled. “Sometimes I forget to loosen up. Someone once told me to never take myself or life too seriously.” She opened her purse and unwrapped a big candy bar. “You’re a good mom to that boy,” she said, taking a huge bite. “He’ll never forget how you made today fun—and neither will I.”

“You made my day. I really needed to hear that. You know,” I paused. “You’re an encourager—and that’s such a gift. It’s amazing when you meet people who can say just the right things that make the day shine bright.”

On our way home, Trey and I decided to go see Layton Funk, a man I absolutely adore. Layton has quadriplegia, and he’s one of the strongest people I know. Luckily—for me—we’ve gotten to be friends since my whole ordeal with cancer began. He’s just one of the coolest people ever, and I’m so glad he lets me come see him from time to time because he always has the best advice.

So, I got more cancer treatments today, but Trey and I had an amazing time goofing around at the infusion clinic, and then seeing Layton Funk was even better than telling Trey about his fictitious future. All in all, it was an unforgettable day.

“Beware the toothless, elderly woman who will teach you so much math!” *still giggling* Life is too short for us to forget how to have fun. 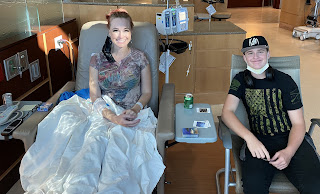 Posted by Crazy Life of a Writing Mom at 6:16 PM