We all have secrets. Every one of us. “Unless you get hit by a car or have some freak accident… You know how you’ll die, you just don’t know when.” My doctor said there’s 99% chance that I’ll die from melanoma. Gee…thanks. She should be a motivational speaker. Anyway, cancer is the secret I carry. I glanced around the hair salon. What baggage do those people have?

“This is the hardest thing I’ve ever been through!” a beauty said, her luscious hair swaying.

“I haven’t known anyone personally who’s gotten COVID,” she told the hairdresser in booth two, “but it’s been terrible to be quarantined with MY children ALL the time! And my husband and I can’t even go out dancing to our favorite place anymore!” She paused to appraise herself in the mirror. “Did you hear the schools got shut down on Friday because so many teachers were sick?”

I wanted to flip out on Mrs. Luscious and tell her what bad things actually are, how I could die soon…how I can’t dance ever again because of tumors—how my son died! Or how I’m HAPPY to be quarantined with my children because it means I’m still alive and so are they.

I turned to my daughter and raised a brow.

“Okay,” my kid whispered, “I know what you’re thinking. But just because we’ve been through a lot more than she has, we shouldn’t judge her. Maybe she REALLY loved that restaurant.”

I scoffed. Out of the mouths of babes… My kids are so great. I wanted to be a better person then, really—yet, I couldn’t stop imagining Mrs. Luscious in a horror movie. You know the character who’s wearing a bikini, screaming and running around because they’ve never seen a zombie before—and you’re trying to get them to calm down and fight, but they’re too busy bawling about some dumb thing (like their favorite restaurant). Of course they’re the first to die.

“Right here,” I said and hobbled back to get my hair trimmed.

I’m embarrassed to say that I judged the hairdresser too. She stood perfect AND darling. She’s probably never experienced anything bad. “Your hair is…interesting. It has a different texture in some spots, and the color is totally different too, blonde, red…gray.”

“I have cancer,” I said in almost a monotone because I’ve said it so many d*mn times to about a million different strangers. “Huge chunks of it fell out from radiation, and it grew in differently.”

My daughter stared at me, practically willing me to be my happy, normal self.

“I’m…so sorry. I would’ve had no idea,” the beautician said.

“It’s okay.” I smiled at my daughter. “Now it’s growing out into a mullet! I told my kids first I got cancer and then I got a mullet—I don’t know what’s worse.”

The woman broke out laughing.

“I lost my eyelashes for a while too! It’s funny the things they never tell ya about. I’ll admit that was pretty bad!”

“Are you still getting treatments—I mean, are you getting better?” Her hands shook and her eyes glassed as if a memory had overtaken her thoughts.

I instantly knew, that flawless beautician has experienced loss. And it must’ve been from someone who died from cancer.

“I’m still getting treatments,” I said more gently now. “They initially gave me two years to live, and now they’re saying I might have more.”

The pansy in booth two—Mrs. Luscious—shut her mouth and started listening—she’d make a bad Catholic too.

The hairdresser told me everything then, how her mom died of cancer at a young age, and how her dad is fighting now.

She pulled up the sleeve of her right arm. “Always more,” I read the vibrant watercolor tattoo. “What does it mean to you?”

“We all have secrets,” she said, mirroring my own thoughts from earlier. “There’s ‘always more’ to everyone’s story.”

Everyone on that side of the salon quieted down. Then Mrs. Luscious shocked the hell out of me. “My brother died of cancer. We used to get coffee together every morning. I’d go to the restaurant alone for years after he passed. But now…well, it’s closed down.”

I blinked. The beautician finished my hair, and I went to pay. “You’ve given me a lot more than a haircut today,” I said. “I needed that reminder. There really is…always more.” 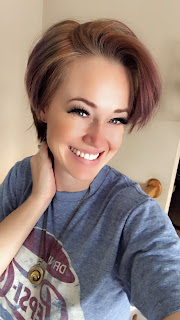 Posted by Crazy Life of a Writing Mom at 2:45 PM