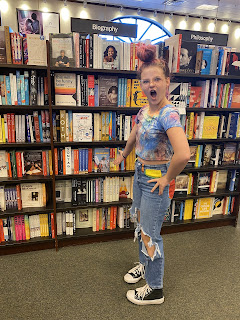 “You see the world weird!” the girl said from the hallway. I sat in the elementary library, reading a book instead of going to recess.

“Lindsay, that’s not very nice!” the librarian said, but Lindsay had already darted out of sight.

“Mrs. Smith,” I said, putting a bookmark in “Anne of Green Gables” and turning to the middle-aged woman. “Do you think I’m weird? I don’t have many friends. And I’m either reading or hanging out with my cat.”

She laughed so sweetly that her voice almost sounded like little bells. “No, Elisa. You’re just you. And…you see beauty in everything. That’s not weird. You’re just lucky.”

I remember the first time Lindsay called me weird. We each had to use figurative language to describe the ocean. I’d closed my eyes and pictured it like liquid glass. I thought about how you can crack the surface and see a whole new world of creatures and excitement just waiting below. It felt magical—just like the library. Except at the library I could “see” more than just the ocean! I could visit Shannara or Middle Earth. I could learn from people like “Anne with an ‘e’” or Mr. Hyde.

Plus, other magical things happened at the library too. My mom had brought me to an event there once and a newspaper reporter asked the head librarian, “Is there a specific kid we should take the picture of? Someone who comes here often?” And of everyone there, they picked me: an unimpressive elementary kid. I even got to be on the front page. Yes, I had a big scab on my forehead from falling out of a gigantic tree, but I still got the glory—forehead-scab and all.

“What do you want to do today?” my mom (Ruby) would ask on Saturdays.

“Can you drop me off at the library? Just for a few hours?”

She’d chuckle because that was almost always my answer.

I devoured books, row after row. The librarian even gave me “The Grey King” because I read it so much. “Just take it, sweetheart,” she said. “We have an extra copy.”

In sixth grade I wrote my first book—most of it at the library. It was 90 pages, about a hamster that ran away from its owner and embarked on a grand adventure. After I wrote that “epic saga—based on a true story” (as I called it), I noticed a change: When I visited libraries or bookstores, they didn’t feel the same. Instead of tons of adventures waiting for me to discover, each book felt like someone’s dream. I couldn’t imagine getting a book published or having other people actually read it. All of that seemed farther away than Narnia.

My first real job was at a library. I could hardly wait to work there and shelve dreams. I’d long outgrown worrying about people like Lindsay, that validation held little value. I cared more about people like the heroines in Austen’s novels, Melville’s Ishmael, or even Margaret Mitchell’s Melanie.

And years later, when I’d become a closet writer, I would bring my kids, nieces, and nephews not just to the library but to bookstores as well. In fact, every time I brought them out, they knew I’d buy them a special book from a specific Barnes and Noble. And the whole time they perused, I’d dream about having a book published, about having a book THERE, about having people actually read a few words that I wrote.

But I kept trying anyway. And nearly two decades after writing my first full-length manuscript of 90,000 words, I finally had a book published by a real publisher.

“Can we go to Barnes and Noble?” Indy asked last Saturday. We’d traveled from Idaho to Utah for a bridal shower. Unbeknownst to Indiana, she’d asked to visit the exact store I’d brought her to when she was a baby. In fact, it’s the same store where I’d brought all of my kids, my nieces, and nephews.

“Do you think they have your book?” she asked.

“Probably not.” I smiled wistfully. “But we can look.”

So, we found the nonfiction section. I let my hand trail along the spines of so many great books like “Night” and “Angela’s Ashes.” And then, my breath caught in my throat. “Oh, my gosh,” I said, trying to keep my emotions in check. “It’s. Actually. Here.”

I gaped, just staring at my dream. I could hardly believe what it felt like, seeing something I’ve wanted so badly…something I’ve fought for against all reason. Something so many people said would never happen. My dream sat on that shelf proving that sometimes the impossible IS possible if we just keep trying.

Indy’s reaction made the moment even better. “Hurry, Mama! Take a picture. I’ll do my ‘look of surprise’ for you.”

After I snapped the picture, she peered at me quizzically. “Are you okay?” she asked.

“I just wanted this with everything in me. And it was so hard to write while I’ve been fighting cancer. But now look. It was worth it.”

“Mama,” she held my hand and swung it, “that’s cool. But if I’m really good—I mean REALLY good—can I get a book today?”

“Yes.” I giggled. And I brought my smallest daughter to the kids’ section where she bought a book about a child who has few friends, owns a cat, and loves the library—she bought something remarkably like herself.

As I watched Indy reading her book this afternoon, I just had to smile.

Life is so ironically beautiful.

Posted by Crazy Life of a Writing Mom at 7:08 PM