Too Good for Our World

I hadn’t realized how sick she’d become. “I think everyone is.”

“Yes.” I paused and thought about what I’ve seen throughout my journey with cancer and all the people I’ve met who are close to death. If people claim they aren’t scared of the unknown—not at all—they’ve either never directly faced the dragon, or they’re lying to themselves. Fighting death reminds me of skydiving. You might feel ready when you prepare to jump, but that doesn’t make it less terrifying. I know I’ll fall into death’s embrace someday, but the thought of my body breaking beyond repair, unanimated without my soul … Well, it seems unfathomable.

The fact that she remained honest through her journey has been humbling. “You’re so strong,” I finally responded, thinking about some of our experiences together. “Whatever the future holds, you’ve got this.”

Ashley exuded something special. She modeled in her younger years and could brighten any room just by entering it. In her 20s, she crafted visionary cakes that could’ve been featured on television. It wasn’t enough that she completely excelled as a mother and a wife; of course, she could master anything.

Sometimes in life, you might encounter someone and immediately feel a … “je ne sais quoi,” but the details of it won’t become apparent until time has passed. That’s what happened with me and Ashley up in the mountains.

Our husbands are best friends—like brothers—so several years ago when Ashley and Garrett invited us to camp with them, I could hardly wait. One day Ashley sat by the stream, gazing wistfully at the water. “I can’t explain it,” she said. “I just feel so alive.” Ashley loved it up there: the looming cliff-face, the refreshing steam, the pure power and majesty of nature. And instead of going back home, like the rest of us, she stayed with her kids in the mountains for days and days. I talked with her on the phone and ended up chuckling. That was her “something special,” her own “je ne sais quoi.” She seemed ethereal—like some mythological creature, always meant to be wild and free. So that’s how I picture Ashley now. She’s sitting by that stream, saying how beautiful everything is and how alive she feels…even though she’s not alive at all—and she had to leave us too soon.

“There was no reason to be scared,” she says, probably making an elaborate cake for God. Then I picture her sending every bit of love to her husband, kids, and mother. She died on her second-oldest son’s birthday. That might seem devasting, but there is something good to find in the heartache. He’ll always have a beautiful, supermodel guardian looking out for him, forever. Always wanting the best. Always protecting and fighting for him, his siblings, and the rest of their family. She’s graduated beyond the pain. The day he first met his mother now marks the anniversary of when God deemed her too perfect for our world. It’s ironic because my son died years ago, and his viewing landed on my birthday. I thought I’d never like that day again, but now it’s a chance to simply remember someone I love.

So this very moment, Ashley might pause up in Heaven while mixing ingredients. And then she may even read these words and nod because we just understand one another.

“I love your posts,” she used to say. “They somehow give me hope.” And how nice of her to read my words because she’d been the strong one.

The point is that even though she died in her early 30s, she showed me what truly gives a life meaning. Instead of flaunting her many talents and her exceptionality, she brought out the best in everyone else. She made people believe in themselves. If everyone could do that, quit worrying about finite accomplishments and pride and self-indulgence—and fight to help those around them despite their own hardships—we’d have paradise on earth.

Ashley got it. She lived purposefully. And I will miss her.

Looking back, when I think about her now, I’ll never forget our time in the mountains where she looked like a nymph of the forest, and her gratitude for the simple things in life changed my view of everything. 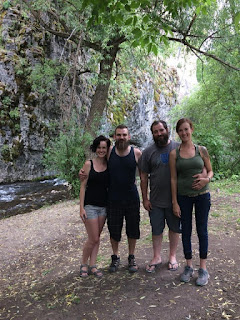 Picture: (left to right) me, Mike, Garrett, and Ashley

Posted by Crazy Life of a Writing Mom at 2:13 PM