A Book Club and a Chicken Murder

A book club read my memoir, invited me to one of their meetings, and it actually became one of my favorite nights of the year! This whole story is actually pretty hilarious—just wait for it.

Before getting too far, I should explain something. I’ve been experiencing some pretty extreme pain in the middle of my spine and my ribs. Of course my brain goes where it always does now: Has the cancer spread? An emergency X-ray yesterday contained findings stating that they actually spotted a fracture.

“You can’t go to the bookclub,” Trey, my 14-year-old said—because apparently now he’s extra darling, overprotective, AND my boss. “You seriously can’t go—not with a fracture.”

“I know you’re worried, Dr. Morris, but I can’t just stop living because my body thinks I’m over 100.” So, I gave everyone a gentle hug, and hobbled off to the book club.

On my way there, I hoped I’d quickly get everything in perspective: the fracture, cancer, and that it’s okay if breathing is painful—at least I’m breathing.

I wondered what these ladies might ask. Would they wonder about Mike and the kids or one of the stories like finding white feathers at the perfect moments. (My mom says white feathers mean angels are looking out for us.) Maybe they’d want to discuss cancer or staying positive despite hardship?

Anyway, after everyone got there and we went out on the deck, that’s when the real excitement started.

All of them seemed quite cordial, but I just hoped something would happen to break the ice. That’s when we heard it—the scream of a dying child. Well, I thought it was a child, but then it screamed and almost gobble-gurgled.

None of us knew what to do. You know the scene: we’re all sitting there, eating fancy fruit, and then something dies.

“What…,” someone asked delicately setting down a piece of fruit. “What is that?”

All of those fancy ladies stood and peered over the railing. That’s when we spotted the host’s dog, full-on murdering a chicken. I mean, chicken IS delicious—and I know where it comes from—but this was a bit National Geographic.

Soon the dog held it by the neck, and we discovered from the host that this white chicken had been one of her favorites. The chicken soon flopped uneventfully, and when the dog spotted her owner, she dropped the chicken and bolted like an armed robber!

I felt so bad for Danielle, the host. You could tell she really loved that chicken (and not in the same way that I love McDonald’s).

“It might still be alive, right?” one woman said.

“I don’t think it’s breathing,” another lady whispered as Danielle approached it. Plus, half of the feathers had been plucked from its neck, face, and left wing leaving a bloody pulp that I have never seen at the grocery store.

Danielle squatted and placed her hand on its back. All of us held our breath and then jumped! Can you believe, the chicken shot up at that exact moment and started walking like a drunken sailor? I swear it came back to life just like Lazarus!

But it looked terrible and another woman in the group, Ashlynn, had gone down to help. “You said you grew up on a farm?” I said over the balcony. “I heard you can grab it by its head and swing it around to break its neck—to put it out of its misery. So you can do that, right?”

She gazed at me despondently, then broke out laughing. “I grew up on a farm…not a ranch.”

“I think she might live!” Danielle said, inspecting the chicken. I’d learned moments before that she’s a PA, and if anyone held the fate of this chicken in their hands it was either the PA or the farmer. Danielle explained that she could put the chicken in a special area where it would be safe from the dog under the deck. And after a minute, she came back to her seat. We were all quiet, not knowing what to say. I had to do something.

“When you laid hands on that chicken, did you pray?” I asked “Because if you did, I think you should pray for me.”

Everyone laughed. “Oh, my gosh,” another lady said. “This is just like something that would’ve happened in your book. Are you going to write about this?”

And that seemed to be the beginning of so many jokes and a great conversation. One lady talked about the white feathers in my book and how she found so much strength in that story. Another woman looked over the balcony and said, “Well, there are a bunch of white feathers down there if anyone wants to take one home.”

Every once in a while the chicken would make a really loud noise under the deck. “Do you think it’ll make it through the night?” Someone asked. “If it doesn’t maybe you could eat it.”

“But what about all of that stress hormone.”

“You could massage it as it dies.”

Those ladies are so fun and full of life. I momentarily forgot about my hardships, and they even made me feel so special. Several of them told me different things they gained from “Two More Years” and how it had changed their perspectives on life. They went around and talked about their bucket lists and things they would like to do. I just felt so fuzzy, warm, and happy.

“I can’t believe you have a fractured bone and you’re still here tonight,” a lady said.

“Honestly, I’ve had the best night. And my pain doesn’t seem like a big deal anymore.”

“Really?” she asked in disbelief.

“I’m just so glad I’m not that chicken.”

So, I had another unforgettable night. I made a whole group of new friends who are selfless and compassionate. I saw a dog murder a chicken. And then I witnessed something come back from the dead. All in all, it was a really beautiful day. Well, not for the chicken. But, you know… 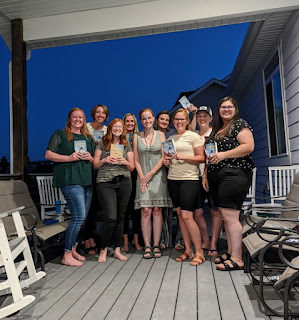 Posted by Crazy Life of a Writing Mom at 1:17 AM