A Disney Princess with Cancer

I answered the door. She’d brought cookies, but I still mentally prepared for a confrontation. This particular woman is hard for me to be around because she doesn’t believe in utilizing modern medicine.

“So, why haven’t they done the gallbladder surgery yet?” she asked.

“There are a lot of moving pieces between cancer treatments and medications,” I said.

“May I be blunt?” she finally asked.

I nodded because when is she not?

I blinked, thinking that’s almost the cue TO be offended.

“I’m not talking about you specifically, but people who continue to get treatments—and are fighting a losing battle—well, they’re kind of a drain on society.”

“Excuse me?” Why had I answered the damn door.

“It’s just that medical intervention costs so much—especially in taxes. Sure some terminal cancer patients might show improvement, but cancer is still what they’ll die from. Don’t you feel like you’re going against God by fighting something so natural? You don’t need to be afraid to die, Elisa. If you’d just come to church…”

Tears formed so fast in my eyes that I could no longer contain my emotions.

“Leave. And don’t come back. I’m not a charity case, and I don’t need your…cookies or your religion or your opinions. I have enough on my plate.”

She walked to the door and then looked back at me, pleadingly. Confused. “Elisa, I’m trying to help you.”

I really didn’t want to hurt her feelings, but I needed to be honest. “You didn’t have time for me before I got sick. I know you feel like you’re doing something nice—and you need that. But this isn’t good for me. It’s hard enough to keep fighting cancer without you telling me that I should quit. That’s fine if you wouldn’t get surgeries or treatments to prolong your life. But you’re not me. I’m doing this for my family.” And after she stepped outside, I shut the door.

I heard the woman talking to herself as she trudged to her car. She said something about how she’d never been treated so poorly and how I’m cutting everyone out of my life.

Despite knowing that I did the right thing for myself, I spent most of Wednesday afternoon crying—in the hospital.

For a normal person, preparing for gallbladder surgery isn’t a big deal and they would just get it done. But for me, I had to stay at the hospital for hours, undergoing various tests including extensive labs, an EKG, and much more. I’m sure the surgery itself will be extremely easy. (I’ve been through worse!) But as I waited for the doctor yesterday, I remembered my visit with that woman and everything suddenly felt insurmountable.

“Are you doing okay?” the doctor asked right after coming into the room.

“I’m happy today,” my voice shook as I plastered a smile onto my face, “because you guys have upped your game. Can you believe they gave me soap—free soap—to use the night before my surgery?”

He broke out laughing. “You know, THAT’S why you’re doing so well—your sense of humor. I read your chart before I came in here.” He paused. “Do you realize how lucky you are?”

He donned his glasses. “Most people would’ve given up by now. That’s one thing, but sometimes it doesn’t matter how much people fight. Once melanoma goes into the brain, it’s almost unheard of for the cancer to die. We don’t like to tell patients that, but it’s true. You’re probably one of the luckiest people I’ve ever met in person.”

“Hey, you’re okay. You’ve been through a lot. I have a couple of extra minutes. What’s bothering you?”

I couldn’t believe he even said that. Most doctors are so busy going from patient to patient, but this guy seemed to really care. So I gave him a brief synopsis of what that lady had said to me and how she doesn’t believe in prolonging life through medical means.

I broke out laughing. I don’t know why it hit me so funny, but it did. I try to love everyone. But I’d just like to love her from a great distance.

After he left, a nurse came to tell me I could leave. “I heard you had a bad week?” she asked.

“Yeah, surgery I can handle, but people being thoughtless is another story… That saying about sticks and stones is dumb. Words do hurt.”

“And people suck.” She paused before leaving. “Can I tell you something that might brighten your day?”

“The nurses were all talking about you earlier. We said it’s weird that you have cancer. It’s like seeing a Disney princess with a terminal illness.”

I snorted—actually snorted. “Imagine Belle or Snow White or Ariel with cancer. That is a strange thought.”

She nodded. “But somehow they’d make it look good.”

So I left the hospital getting approved for surgery this Tuesday. And I finally figured out why the interaction with that lady bothered me so much.

I just wish people would do what they can to be genuinely good to each other. It’s not about making cookies for acquaintances, trying to convert unbelievers, or doing some stupid thing that might look good on paper. It’s about actually caring like that doctor and nurse did. It’s about taking time to listen or just brightening someone’s day. It’s about withholding opinions if they might make someone end life-saving treatments—or if those opinions will somehow make life unnecessarily harder for the listener.

Anyway, it’s been a rough week, but a good one too. I got called a Disney princess who has cancer. It could be better, but you know what…I’ll take what I can. 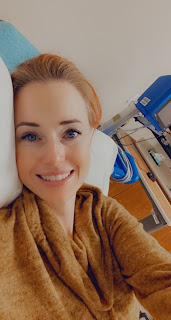 Posted by Crazy Life of a Writing Mom at 8:15 PM