She Felt Heard … That’s What Mattered

I spotted an elderly lady sitting across from me the other day. My heart dropped as I saw how she watched those around her. A young woman passed and smiled to a middle-aged man. Others walked by, one even nodding to me, but no one acknowledged the elderly woman as if she’d been rendered invisible. And it hit me: “Why do younger generations so often discredit older generations, or worse, make them feel obsolete?”

So, I stood and took a seat right by the woman. She looked a bit stunned that I’d gone to sit so close. But then I asked her about her day and her life. After a moment, she laughed and smiled. And I learned all sorts of things about her childhood on a farm and her husband who had passed away in his 80s. I even learned about her son with Down syndrome.

“Well, it was nice to meet you,” I said, and I started to stand.

“Thank you for talking with me. I’m still not sure why you came over to visit, but being older, sometimes I feel invisible. It was nice to feel important even if it was just for a moment.”

Her frail hand came up to rest on my left wrist, the same site where doctors first discovered the melanoma and had to carve a five-inch scar into my arm.

“You’re so young and innocent. I hope you won’t experience the hardships that I have so you can remain as happy and carefree as you are now.”

There were so many things I could’ve told her. About stage four cancer or how she literally touched the place where it all started. About my son who died or my failed marriage. But I realized, the importance of not placing my burden on someone else. This moment wasn’t about me.

“Elisa, are you coming?” the man motioned me forward.

“Yes.” Then I turned to the woman, and placed my other hand on top of hers. “God bless you,” I said before leaving the waiting room.

And I realized that sometimes there’s beauty in giving people much-needed perspective, but there are other times when the opposite is much more important. I didn’t tell her about my problems or hardships. I didn’t need to share how exhausted I was or how sick I felt the entire time I smiled. Instead, I let that moment be about her. She felt “heard,” and I think THAT made all the difference. 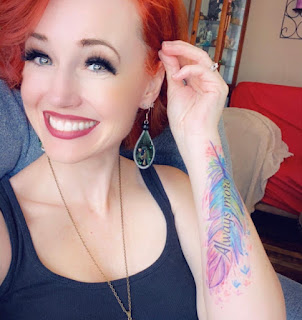 Posted by Crazy Life of a Writing Mom at 3:14 PM