The Power of Perseverance

Audition day came, and people sat expectantly in chairs that lined both sides of the hallway. Cellists stood with their large instruments. Violists talked about their craft.... And everyone looked just as serious as I did. That’s when I realized that no matter how much I had practiced, I needed something special to stand out.

But the wait lasted forever, and after a time, I overheard some of the parents talking to their kids.

“What if I don’t make it in?” a girl whispered to her mother.

“You have to! There’s no other option. Our family always gets what we want.” The mom wore a fancy creme-colored dress and a look of complete pride. My skin heated. Her poor daughter.

“You’ll do great,” I whispered to the girl, who also held a violin.

She went to respond, but the mother grabbed her wrist, then glanced at me condescendingly; apparently “their family” gets what they want AND never fraternizes with the competition.

I remained quiet after that, thinking how they probably had more money than I could fathom, yet I had what really mattered: a mom who cared more about ME than my ability to win. After all, she’d only brought me, since this was my dream.

At the age of 15, I practiced the violin for three hours a day. The notes began resinating with emotion—the accents became incredible. Sometimes my fingers would bleed, and I’d feel like I couldn’t do it anymore. But still…I continued. One of my violin teachers—a symphony violinist herself—began taping a thumbtack to the neck of my instrument, just so I wouldn’t rest my wrist against it. “Try harder!” she’d say. “Do you want this or not?” And so I learned despite the pain and struggling.... Because that violin had somehow gotten into my soul—and no one could tear us apart.

A youth symphony representative finally called my name. I stood up and gave my mother a hug. “You’ll do great, Elisa,” she said. “Just do your best.” I looked into her eyes, knowing I could never truly thank her or my father enough—for scrimping and saving so I could take lessons that cost a small fortune. I could never explain how much their love and support meant to me.

During the audition, the conductor of the youth symphony scribbled into a gigantic notebook.

“You’re excused,” the conductor said with hardly more than a nod when I’d finished.

I trudged to the door, but something rose up inside of me, and just before I left, I set my violin on a nearby table and faced the conductor.

“Listen,” I said. “I want this with EVERYTHING in me. I don’t pray much, but I even prayed for this! I’ve been practicing for three hours every day—and I’m willing to practice more. My heart and soul are in this. If you pick me for the symphony orchestra, I promise you won’t regret it. You want a group who can make a difference. You need members who play with their souls! That’s why you need me.”

The air hung thick. I didn’t really know if she “needed” me—but I told her that anyway!

I picked up my violin and turned toward the door. That’s when the woman’s voice stopped me.

I tried not jumping.... I tried not crying—or yelling out in excitement. Instead, I told her she wouldn’t regret it. And I don’t think she ever did.

At this point in my life, I’m not sitting in an audition hall trying to earn a place on a symphony orchestra, instead I’m fighting JUST to stay alive.

All of the tenacity, the moxie, the initiative I had at the age of 15—I need to remember that passion now.

Who knew a conductor’s actions could so vastly impact my life?

For my last performance with that group, I played with the actual Utah Symphony. The woman I sat next to spoke about passion and how the best melodies could change the world. I told her how I made it on the youth symphony not because I was the most talented violinist who auditioned but because I had a lot of heart.

“You know,” she said, “you can be the most talented person ever, but if you’re not willing to put in the work—and you don’t have the heart for it—it won’t matter at all. In the end, people with passion will pass you by. Do you have what it takes to not just be good, but to be excellent? I think you do.”

Her words made me cry.

It’s strange looking back, because now that I’m in my late 30s, I’ve played for thousands upon thousands of listeners in various venues where the lights shone so bright I couldn't see anyone in the crowd. I would pretend to play for God alone, at the end of all time. Where no mistakes mattered and the light cleansed my soul.

Maybe that’s what brought back these memories, the whirring machines with their loud noises and bright lights…. It’s just a reminder to persevere and stay strong. I think that’s a good thing for all of us to remember no matter what our struggles may be.

This photo was taken in August of 2020. Doctors diagnosed me with stage four cancer two months later…. 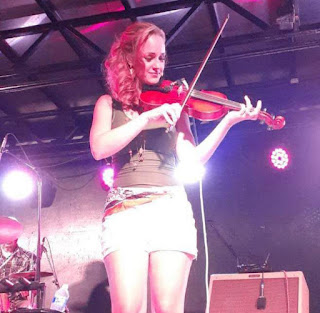 Posted by Crazy Life of a Writing Mom at 3:55 PM