I've watched exactly one person die: my son. And it was horrendous.

I've seen numerous other people moments before their deaths because I worked in a burn unit and also spent time playing my violin for palliative care patients--as well as for funerals. I've witnessed people who chose to die with medication on board and others who waived the pain pills. Unfortunately, now that I have a new tumor, these memories have surfaced and I must deal with my fears.
I don't mean to be negative. It's just reality: The glass isn't half-full or half-empty--the damn thing just has liquid in it. Basically, IF I continue to grow more tumors by this fall, doctors will look into clinical trials because my body won't be able to withstand any more immunotherapy treatments. And IF those "trials" don't work, that's the end of the line for me. It could still take a long while to die--years--and who knows what I might expect at that point. Of course, this new bone infusion they're starting tomorrow could be a game-changer. My body might finally cooperate so I won't get infections or liver failure and thus be forced to skip treatments--my literal life-line.
You might be thinking, "Don't worry about this." "Don't count chickens before they're hatched." But when someone is facing death like this, they can't help but wonder, at least sometimes. And THAT is my reality.
So, last night I had my second big panic attack since embarking on this quest. ("Quest" because it makes cancer somehow better like I might meet Frodo--screw that, Sam! Frodo's a pansy.) I skipped my nerve pain medicine yesterday. I'm down to only a few pills a day and quite proud of myself. But without this nerve medicine, it felt like someone had punched me in the thigh and back where my biggest tumors are. This became so unbearable that when Mike got home from work, I cried--like freakin' Frodo.
"Elisa, are you okay?"
"No." I sat in scalding water in the bathtub--the only thing that could momentarily ease the pain. Bubbles gleamed around me, reminiscent of Doris Day in "Pillow Talk." But she made it look far more glamorous since my face probably strained with fatigue. "It's just that I'm not scared of the cancer, I'm scared of the treatments. I'm trying to fight and stay alive for you and the kids." I sighed, thinking of how the bone infusions are supposed to hurt excruciatingly bad. "Tonight Trey and I played music. I had so much fun jamming with him. But then, I thought about how the doctors said at the most I'll have 10 years from my diagnosis in 2020. That means I'll only live to see Trey turn 21. All of the kids will be so young."
Instead of saying how they're making medical advances all the time or I could try this or that, Mike nodded. "It's okay to cry. It's good to know I'm not the only one who cries about all of this sometimes."
I reached up, and Mike held my small, soapy hand in his large, masculine one. "We don't know where any of this is going. Hell, maybe this bone infusion will be the thing to save my life! BUT I do need to know something."
"Anything. What is it?"
"If we get to the end of the line, and things are terrible, really terrible. If we know I'm about to die ..." I suddenly cried so hard that my body shook, sending little tidal waves across the bathtub's water. "I just want to die with dignity."
"You're talking about going to Oregon or something?" he said, his voice a bit shaky.
"Yes."
"Elisa, how would we ... would we invite our families over for one last dinner?" Mike's resolve broke. I've never seen such a brave man, so bare and vulnerable.
I blinked back tears. "I think we could. But, would that be an option? I mean, if we get to that point a long time from now?"
"Yes. Of course, Elisa. If there are no other options and you're just suffering. But we aren't there yet. We aren't even close," he said.
"No, we're not close. But you've just lifted such a huge burden off of me. That makes this less scary. Just to realize if there's no way out, I still have a choice."
So, it probably sounds morbid, and I know many people will not agree with or understand this post, but I feel better. I'm ready to go into treatments tomorrow. I'm ready to fight like hell. I'm ready to kick cancer's ass 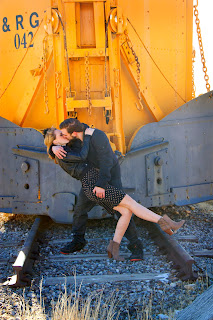 (One of our engagement photos taken in 2014.)
. Because I STILL have a choice. And right now, I choose to fight. I want to see my kids grow up and have their adult lives, careers, and babies of their own. I want to grow old with Mike. I'm going to fight for it, until I can't anymore. But even then, at least I'll still have dignity.
It really is FAR too soon to think about this, yet it gives me peace and strength.
"You don't look quite so scared anymore," Mike said after I'd donned my PJs and gotten into bed.
"No, I'm ready to fight again. I was just smiling, thinking how my dad's side of the family has Viking blood. Cancer picked the wrong broad this time. It's stupid to mess with a Viking."
Mike laughed so hard, wrapped his arms around me, and we fell asleep with me wondering over the beauty of being married to such an amazing man. We'll get through this one way or another, and everything will be okay. God has a plan.
Posted by Crazy Life of a Writing Mom at 4:58 PM