My trip to Eastern Utah yesterday was awesome.  I'll be interviewed on a Carbon County radio station at 7 tomorrow morning--wish me luck.  This will be fun preparing for the signing on Friday.
I'd like to thank Dee Ready for guest posting for me since things are so busy.  She's back again today--I wanted her to tell you about her new book.
Take it away, Dee!


Years ago, I lived with Dulcy—the sweetest of cats. For seventeen-and-a-half years, she and I cherished one another. On July 8, 1989, two days after she died, Dulcy began to channel through me the purr of our relationship. The words came from that deep center of myself where Oneness dwells and surely Dulcy and I were One.
In April 1991, I sent a query letter plus five chapters of the book to Jane Meara, an editor at Crown Publishing in New York. In her return letter she asked me to delete half of the 42,000 words of Dulcy’s manuscript by concentrating only on our relationship. Immediately I ruthlessly rid the manuscript of any story that didn’t concern the two of us.
Of course, being a hoarder of words, I pasted everything I cut into a separate document. (If you’d like to know more about Dulcy and our relationship, please click here for a guest posting I did on Elisa’s blog yesterday.)

How A Cat's Life: Dulcy's Story came to be

Crown published A Cat’s Life: Dulcy’s Story in September 1992. For the following six months I enjoyed the hoopla of signings, readings, interviews, and local talk-show appearances. By the following spring, all that ended. Two years later, the final count for the sales came to just under 14,000 books in the United States.

I do not know what the sales were for the editions published in Korea, Germany, Taiwan, and Japan. However, the advance against royalty from each publisher plus the royalties on the US edition enabled me to visit Greece for four weeks to research a novel, on which I’m still working.
During the next two years, I tried to create a salable manuscript from the stories  I’d cut. To do so, I changed the point of view to third person and introduced Tromley, the cat who lived in the house behind ours. In this first attempt to create a companion book, Dulcy used the deleted stories from A Cat’s Life to teach Tromley how to win a human’s love.
Jane Meara’s response?
“It doesn’t work for me.”
No contract.
Next, I tried to use the deleted sections to create the life of Tromley. No go. Down deep I was glad. Using the material that way felt like a betrayal of Dulcy.
Finally, I came up with the idea of cobbling the material into twelve distinct stories. Once again, Jane Meara turned down the manuscript. “No thread holds it together,” she said. “Nothing compels me to read beyond the first story.”
In other words, no glue held the stories together.
So I set aside the material that had been cut in 1991. Someday, I thought, I’ll figure out how to get Dulcy’s other stories out to an audience.
That someday came several years later when I got the idea to divide the stories into twelve habits of successful cats. Dulcy would “purr” these habits. Then I’d follow each with a short reflection about how the habit had influenced my life as her human. I titled this new manuscript Twelve Habits of Highly Successful Cats and Their Humans by Dulcy and Dee Ready.
By this time, Jane Meara had left Crown. I tried the agent route but was unable to interest anyone in even reading the proposed book. Once again, no chance to get Dulcy’s words to readers.
Now we come to today. I’ve concluded that finding an agent or an editor in today’s publishing milieu is almost impossible. However, Wayman—a small, but growing, publishing house—expressed interest. Both the paper book and the e-book are now available on Amazon. 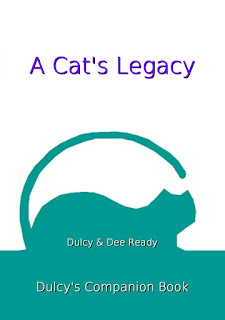 If you have any interest in reading Dulcy’s words of wisdom—or mine—please click here to get to its location on Amazon. The cover—designed by Elisa—is lovely, and Dulcy’s purr is sweet. As to the text I wrote, it represents experiences I’ve had in living a long and happy life. May you know peace today in your own lives.
Posted by Crazy Life of a Writing Mom at 9:53 AM