Florence is hard to describe because it’s so beautiful. Streets spider-vein around, all seeming to lead to one central location: the Cathedral of Santa Maria del Fiore. People visit, watching street artists, eating gelato, and discussing the fun items they discovered at surrounding shops. But, as always, our adventures became somehow hilarious. And no matter how hard I try to be “fancy,” we end up having a real-life moment that is hysterical.

I waited outside the art building, unable to go in because of our music cases (some kind of safety concern). I honestly felt fine with that because I loved watching people go in and come out after seeing Michelangelo’s David. So I sat in my wheelchair and watched as people trudged in … glum, bored, eager, or just filthy rich. When they came out, it seemed they’d been touched by the hand of God himself, brought back to a gentler, humbler state of being. After so many individuals came out, I could hardly wait to see Mike, Trey, and Indy’s reaction.

Ruby and Sky had gone off into the city alone. Since Ruby is a tattoo artist she decided to find the best tattoo shop in town to get a matching tattoo with Sky: wine glasses. (It went so well that after seeing Ruby’s work. The owner offered Ruby a job in Florence!)

Anyway, Mike stepped from the building first, looking completely shocked and amazed—as if he’d stood under a rocket ship and somehow survived the blast.

That sculpture of David must be one hell of a thing.

“He is big … As tall as our house. Elisa, it was … amazing. I can’t describe what I’m feeling. Just imagining one man carving that by himself … And it’s in such perfect condition after all of this time.”

Then Trey came out. He pulled his ukulele from his backpack and started playing it. “That girl just looked at you,” I said. Trey is like a California surfer boy from the ‘60s.

I stifled a laugh and readjusted my position in my wheelchair. “Where’s Indy?”

At that moment, poor Indy stumbled from the building. “Indy? Are you okay?”

“Mama … “ She stared blankly ahead, looking but not seeing. “He was naked. Haven’t they heard of Adam and Eve—even they knew to put clothes on. I was fine with the six-pack. But that was gross.”

Mike started pushing me across the cobblestone so we could get gelato. “Was he seriously as tall as our house?”

“Yeah.” Mike showed me a picture he’d taken. David’s toes were about eye level, and he seemed completely skewed.

“Well …” I couldn’t pull my eyes from his schmeckle. “I can see why they didn’t name this David and Goliath.”

So we went to the grounds of the Cathedral of Santa Maria del Fiore and had a gelato just like one of my favorite uncles recommended. (When Uncle Roger recommends something, you should do it because that man has taste!)

Anyway, Trey, Mike, and I jammed in the piazza (or square). People took pictures and videos probably feeling nostalgic since Mike had learned the “Tarantella” for a moment like this. It felt wonderful knowing we would be part of a good memory for so many tourists—and a local artist who sat by us as we played.

When Ruby and Sky came over, showing us their tattoos and raving about their experience, I knew it was an unforgettable day for everyone. No wonder people say Florence is the most beautiful city on earth. It’s definitely up there for me. 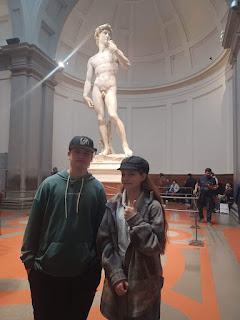 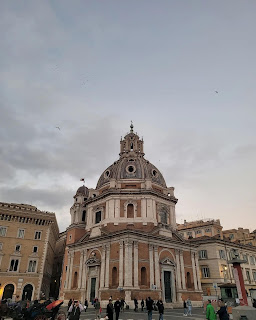