Our First Night in Rome — The Roman Apartment

The train that night, for Christmas Eve, pulsed with anxious energy. Trey said it reminded him of the Polar Express. Attendants came through and gave each of us a little treat like Edmund’s Turkish delight in “The Lion, the Witch, and the Wardrobe,” and I couldn’t get over the magic swimming around us, so thick you could literally taste it. 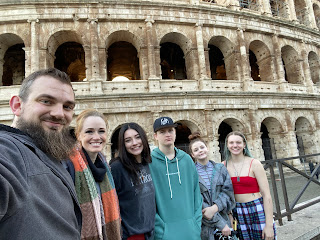 We spent a lot of hours traveling and sleeping on the train—and I absolutely loved it. After that particular train stopped, Mike set up my wheelchair and helped me onto the platform. “Look,” I whispered to Mike and pointed at the kids after I sat down. All of them had such wide eyes, filled to the brim with excitement, but the two who seemed especially elated were Sky, who enjoys history, and Indy, who adores the movie “Roman Holiday.”
“Rome,” Sky said, a mature solemnity in her 18-year-old voice. Her blue eyes sparkled as if she’d just vowed to live an even more intentional life.
Indy squeezed my shoulder three times for “I love you.” She did this little hop-skip, too, that I adore. “Mama, can you believe we’re visiting the same city where Audrey Hepburn came?!”
“It’s amazing,” I said, and Mike chuckled because Indy and I have watched “Roman Holiday” together more times than I’m willing to admit.
Trey wanted to find our AirBnB apartment because the sooner we dropped our backpacks off, the sooner we could eat authentic Italian pizza. “And I need to use the bathroom,” Ruby said. 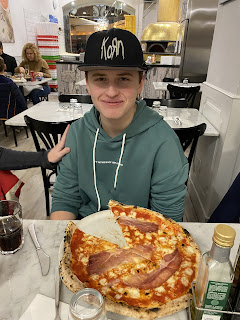 So, it became a rush. We tried to save money by having Mike and the four kids walk everywhere while Mike pushed me in the wheelchair. But the cobblestone was a bit aggressive, the family seemed tired, and I got the kind of stone massage no one hopes for. All of our worries dissipated when we looked to the left. There, tucked amidst apartment buildings, the chaos of a modern city, and more people than New York, we spotted the Colosseum.
“It’s … It’s just right there,” Sky said, immediately taking pictures. “This is so cool.”
It’s hard to describe what that type of ancient building can do for one’s soul. You start thinking about the people who have been there. The people who have died amid its walls. The Caesars, gladiators, peoples, and kingdoms that have risen and fallen with time. And the travelers, like me and my family, who will continue to visit because it’s so enormous and profound. In fact, it’s hard seeing something that brutally majestic and realizing people built it so long ago. One might even say it “feels” infinite, but—or course—it’s finite like we all are.
Someday it will be gone like the people who made it. Like we all will be … That’s the thing about Rome. You’re just walking around, traversing a busy city, or eating incredible food, when suddenly you stumble upon an excavation site where they found more ruins. Rome is a treasure trove of wonder, art, and an opportunity for reflection.
We finally stood in front of our “apartment,” but the door loomed, a massive drawbridge to a dungeon. “I really need to use the bathroom now,” Ruby whispered.
“I’m trying to hurry. But I don’t know how to open this thing.” Mike wiggled the doorknob which appeared tiny in contrast to the looming door. He kept fiddling with it for a moment longer, and to our surprise, a tiny door opened within the massive door. Inception! 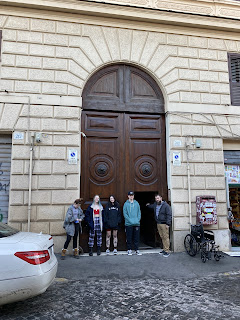 “It’s like a movie!” Trey said, absentmindedly strumming his ukulele. I swear he even slept with that thing.
Anyway, so many incredible things happened in Rome. I loved hearing the bells from the church down the road. I reveled in the dilapidated apartment we rented, with so much character and charm. Some of the lights didn’t work, the floorboards would come up when you walked, and there were big bars on the windows, but none of us will ever forget it—or it’s 10+ locks on the front door! Indy even went around taking notes about the apartment “for her future self,” so she can one day tell her children what it was like when she was a child.
I need to write a little bit more about Rome. I honestly feel like I’m still trying wrap my head around it. I’m so glad we didn’t go for a regular tourist experience. Mike brought us to places where people actually live, and we got to see what real life is like—or at least have a glimpse of it. Anyway, ancient architecture, art, beauty, and intrigue aside, the people we met were absolutely unforgettable … Isn’t it interesting how it always comes back to people and connections?
Tomorrow will be a fun post.
I want to tell you about a man we met who sold gelato and how Indy started giving strangers little “angel coins” along the way. This is when the trip started to get exceptional.
Posted by Crazy Life of a Writing Mom at 9:56 AM