Amazing gelato shops and pizzerias dot the streets of Rome, but only one truly stole our hearts …

“Indiana,” I said, as she helped me do the dishes from breakfast. “I brought these for you.” I handed her a bag of coins that had angels cut out of them.

“What are these?” she asked.

“They’re angel coins.” I paused because they meant more to me than she realized. When I first got diagnosed with cancer, a thoughtful friend mailed those to me. “If you really like someone during our trip here in Italy, give them a coin.”

She nodded, tucked the bag into her pocket, and we prepared to leave for the day.

The morning and afternoon seemed filled with discoveries around every corner. The streets buzzed with people taking pictures of ruins and beautifully renovated buildings. It honestly felt unforgettable, but still, my favorite memory happened that night.

The man in the tiny shop barely spoke English, and we tried our best in Italian. “Gelato?” he asked Indy and Trey.

The man grinned, making the skin crinkle far across his cheeks like ripples in a stream. And I couldn’t help but grin back. He seemed to embody everything kind and good in the world. He’d probably seen so much in his years—haven’t we all?—but instead of letting that harden him, he’d become gentle and wonderful. “Size?” he asked in English.

“Molto grande!” Indy said, and everyone laughed because “very big” (as she’d just said) wasn’t on the menu.

“Oh!” The man chuckled like an Italian Santa. “Molto grande?”

“Per favore?” Please. Indy’s eyes widened as she pled.

“Okay … Okay …”  He laughed so hard. “Quale?” He pointed to a few different flavors.

She tapped the glass in front of the tiramisu.

He wouldn’t give her tiramisu, but he gave her four huge scoops of the other ice creams. Then he gave Trey a big bowl too. Trey is so shy and darling. Everyone thinks he’s much older than he is because he’s 5’10” and only 14. “Grazie mille,” Trey whispered and glanced up.

We went to the door where my wheelchair rested against the wall. Mike set it up on the cobblestone walkway outside of the shop, and the man looked out the door with so much concern. I’d seen him watching how I stood in the store, and I knew he wondered what was wrong, but I couldn’t fully tell him about my battle with cancer or how hard I’ve fought to live. I couldn’t even explain how my biggest bucket list item was going to Italy with my family and how generous people had made this possible. Isn’t that how it goes; we all have a story to share, but no one really knows all of it except ourselves?

He pointed to my wheelchair and placed his hand over his heart, as if somehow trying to express sorrow for what we might be going through.

“Arrivederci, bello,” Goodbye, beautiful. Indy giggled when she said it, and the bellowing laughter from the man was worth more than almost anything.

The shop closed after we left, and we got to our apartment in record time. “Oh, no! I didn’t get to give him a coin!” The thought hit Indy too late.

“You can try tomorrow,” I said.

“Our train leaves before the shop opens,” Mike said.

The next day as we passed the gelato shop, I noticed Indy sticking something at the bottom of the door.

“What are you up to?” I asked. “Slow down, guys. We don’t want to lose Indy.” Mike pushed me in the wheelchair, and the kids moved in a line with us. In fact, that’s how we went everywhere from Milan to Florence to Rome, Naples, and Pompeii.

I got out of my wheelchair and struggled to pick up the paper Indy had stuck in the door. “Sei amato. Piccola.” Then she’d taped an angel coin to the paper. I thought about her words “you are loved,” and I hugged her so hard. “He’ll like this so much!” I said to Indy as we continued toward the train station. And as I looked at my family, I thought that Mike and I have the best kids in the world. I’m so grateful we got to see Italy with them. 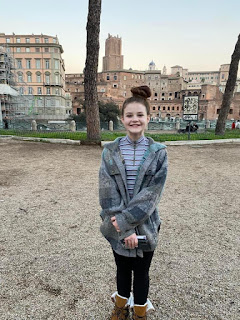 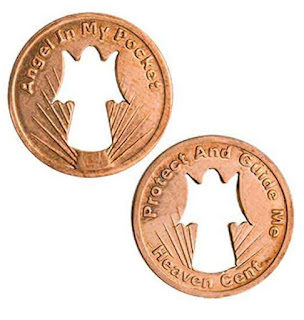