I had the privilege of watching the movie “Unplanned,” the story of Abby Johnson who was the youngest director (in history) of a Planned Parenthood clinic.

Basically, the movie details the experience of a woman who worked in an abortion clinic. My stomach clenched in knots for over half of the movie, partially because of my own experiences and also from seeing the completely believable emotions of the people on-screen. Although this did have the feel of a cross between a Christian and (almost) Hallmark movie at times, I did find it quite compelling despite the aforementioned details. In short: this is not a movie people will easily forget.

One scene in particular stuck with me, where a family pleads with a woman, begging her to not have an abortion; watch the movie and you’ll know which scene I’m referring to. I literally felt the pain in my own heart, just listening to their words.

I’ll admit, I was terrified to watch this since I’ve experienced the death of a child, who died at two-and-a-half months at Primary Children’s Hospital.

This might not make sense to other people, but subjects like this – especially movies – sometimes bring back memories I’m not always strong enough to face.

I got pregnant at 18. It wasn’t glamorous. I’d actually broken up with the man before it happened. I still remember the night I got pregnant because I’d been drinking. Later, the guy had no idea I was pregnant and I had no intention of telling him.

I still remember going to the doctor and the first thing they said was, “You can have an abortion.”

It’s scary being pregnant that young and single, feeling completely alone. Plus, I’d heard about childbirth and that didn’t sound like something I ever wanted to sign up for. But abortion...now that was something completely different. It brought me to this dark place, somewhere beyond scary. They urged me to do what was best for myself, calling my baby a  “fetus.”

It was scary being pregnant so young, embarrassing too. For some reason the doctor’s words terrified me more than childbirth, embarrassment and even stretch-marks.

I got a job at a bowling alley. Imagine my surprise when my ex showed up and asked me to marry him.

Like I wrote before, it isn’t a glamorous story, but it’s what happened. Working pregnant, unmarried at a bowling alley, now that’s what dreams are made of.

Fast forward to a time when I was pregnant with our second child. I had a feeling something was wrong and I put the ultrasound off for longer than normal.

After the ultrasound, I got a call from the doctor. The thing is, when a doctor calls you at home, it’s not a good call.

I listened to his vinegar words and felt my body nearly crumbling beneath me as I learned that my baby had birth defects and would probably die.

I had an amniocentesis after that, to test my baby for trisomy. The whole time the doctor called my baby a fetus like he wasn’t real. I heard the word “viable” too. Viable and fetus were practically joined at the hip for that doctor.

Family members urged me to think about an abortion. The doctor said I was young, but that I needed to think beyond my years, think about the child I already had and how a sibling with birth defects could affect her.

I refused to have an abortion. It’s difficult when people you love and doctors try pressuring you into having an abortion.

I had a dream that I gave birth to a fish. Worries plagued me.

My son was born and although he didn’t live a long life, he impacted me more than anyone. The day I finally got to hold him, I remember how he held my finger with his tiny hand. He had the softest hair and this amazing strength to him. He snuggled into me, with so much love.  I knew then that even if he died nothing could break our bond, not regret or pain, not even death.

I had to take him off of life support, making a choice no mother should ever have to make. When he suffocated in my arms, I wished I could die too.... We’d given him every chance to live, and it still wasn’t enough. Yet, for the time I had to fall in love with my baby...to see his beautiful eyes and feel the love of holding him in my arms. I would never trade that...for anything.

And now as I think about abortion and remember the two times I was urged to make that choice, I’m so grateful I didn’t. My first baby is now 18 and one of the most amazing people I know. I hugged her the other day after she looked at different colleges.

“You know, you and God got me through when your brother died. You’ve been my strength through everything. I became stronger, for you.”

You can read more about that story here: “The Golden Sky” by EC Stilson 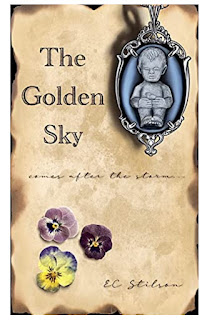 Posted by Crazy Life of a Writing Mom at 8:57 PM