They Changed My Life

I first met the Olesons over 5 years ago at a band audition in Blackfoot. I didn’t even live in the area, and I shook with nerves. The legendary band leader, Harry, had seen videos of me fiddling, and although I’d talked with him briefly, I’d never played with the band—or even met the members in it.
Regardless, I went and jammed at the Elks Lodge, having no idea what songs were expected or what the band members would think of me. Then, they played country music—when I’d been used to Metallica and Offspring! My fingers searched frantically for the right notes. I honestly thought I’d blow the audition, when a couple miraculously got up and danced. They were unforgettable really, bringing the music to life in such a tangible way. That’s when I relaxed, and my fiddle resounded with double-stops and harmonies. I knew then, I’d made it into the band, Rough Stock. Looking back, maybe it was God’s kind of foreshadowing. Who knew that exact couple would change my life forever?
“Who are they?” I asked a woman at another table.
“One of the most well-known couples in Blackfoot. Justin recently became a county prosecutor. Christie’s a nurse and really loved by everyone in town.”
“Huh,” I said. I didn’t know much about Blackfoot other than the Potato Museum. “They seem nice.” I was just grateful they’d unknowingly helped me join a band.
Time passed and I loved every single fiddle gig all across Idaho and Utah, but that alone wouldn’t pay the bills. So, the next year I landed a job—in Blackfoot of all places—running a newspaper just a block from the Elks Lodge!
I met so many legends, and luckily people like the Olesons, the Rupes, the kind mayor (Marc Carroll), the Rotary group, American Legion members, people with the Historical Society, those with the senior centers (the list goes on and on)—and thousands of AMAZING readers!—helped by spreading good things about the paper and providing story tips! The Morning News had almost gone under right before I got there, but through everyone’s support, we somehow kept that small-town paper running with local news—even if I had to try new things that REALLY put me out of my comfort zone.
One day, Justin’s awesome brother, Andrew, invited me to inoculate cows. “Could be a great story!” he said, and before I knew it, I headed to his dad’s place so we could “get ‘er done.” Christie artfully showed me how to give the shots while Justin branded the cows. I did pretty great, for a city girl, until I inoculated myself! (But…no one’s perfect.)
Months later, a large conglomerate broke my heart by buying the newspaper and only keeping one employee for the long haul. I honestly thought the biggest fight of my life had ended, but, if I’ve learned anything, it’s that life is uncertain.
Oncologists in Idaho diagnosed me with cancer. They’d found one tumor that had eaten an entire section of my vertebrae in my lower back. Christie urged me then, saying I should get a second opinion in Utah. And it’s a good thing I did because the melanoma team there discovered tumors all up my spine—and in my brain. Christie…well, she saved my life.
I thought about all of this last week as Justin helped finalize my will. That could’ve been a sad, emotional thing, especially when you’re in my situation, but we smiled and joked. It wasn’t until Justin gave me a hefty discount that I really had to keep the tears at bay. I’d asked him to draft my will because I wanted to somehow pay him and Christie back, yet there he sat, being kind again.
Looking back, I wonder if the couple really even knew how much they’ve blessed my life from the little things—that first dance and inoculating cows—to the big things (lifesaving advice and drafting my will). Some people might never know what impact they’ve had…but I wanted the Olesons to know.
From the girl who ran the paper for a time in Blackfoot, thank you for your kindness to me. It’s been unforgettable. Really. It’s people like you who’ve given me strength to continue on even when life has felt unbearably hard. You ARE amazing! 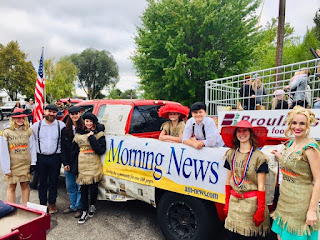 For parades in Blackfoot and Shelley, Idaho. 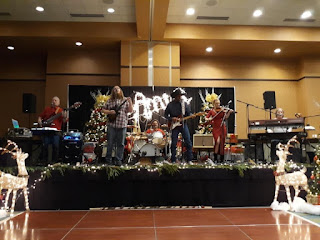 Rough Stock playing a gig in Forthall.
Posted by Crazy Life of a Writing Mom at 9:47 AM