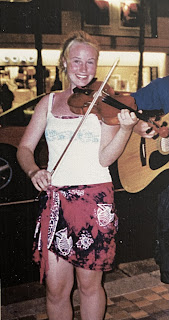 I watched the homeless people who live in the areas near the Huntsman Cancer Center. Some of them live in pop-up tents that they move from place to place (even along main roads) so the police can’t find them during the day. I first saw these people during my initial round of radiation in 2020. I’d thought I had things bad until I saw them. My mom and I both gaped. She and my dad had rented an airbnb for us to stay in near Trolley Square. We’d never expected to discover camping tents perched on a nearby road median when we woke up at 5:30 a.m.

Most of the homeless people move to warmer areas during this time of year, but the ones who stay in Utah usually go to Liberty Park or the hillside east of Woods Cross.

“I’ve added something to my bucket list,” I told my mother-in-law as she drove me to my last cancer treatment. She’s quite beautiful, extremely intelligent, and very by-the-book.

“I’d like to go visit the homeless people who camp on that hill.” I pointed to the commune of tents. “It would be so fun to bring them a bunch of Little Caesar’s pizzas and play my violin for them. Would you go with me?”

She broke out laughing and just smiled. I’m not sure if I add excitement, joy, or fear to my mother-in-law’s life, but I honestly think we would’ve been the best of friends if we’d grown up together.

The conversation changed to different topics, but even after we arrived at the cancer center, I couldn’t stop thinking about the homeless people. It’s so cold, and I know frostbite is a bigger risk than most people want to admit. I guess my heart goes out to them because when I was 17, I was a homeless street musician.

I traveled from Utah to California. Fiddled up the California coast and then flew from San Francisco to Hawaii. Some of my family members and “friends” were pretty embarrassed by it. Who sets out to be a homeless street musician? But I knew Hawaii was warm, and it sounded fun. The things I learned there broke me of materialism, being greedy, or seeking fame. In fact, I spent one of my favorite days there jamming with a bunch of Hawaiians as they strummed their ukes.

Over 20 years later, it can be hard feeling sick and knowing I’ve been brought pretty low. But I think so many times people forget what really matters. On the streets of Hawaii my favorite memories are of making new friends, encouraging the other street performers, being able to afford more than the dollar Big Mac, and just hearing tourists clap after they’d heard an especially well-played fiddle solo.

We can sit in our plumbed, heated houses and think how bad it sucks being quarantined and dealing with whatever shortage or mandate might be going on, but we’ve really lost sight of the big picture. We judge people by their degree(s), their status, and their income. We judge people by often-meaningless achievements. If I learned anything from being homeless in Hawaii, it’s the power of love and kindness. A homeless man named Skipper gave me kind words that forever changed my life while some rich tourists could hardly give me a nod.

I became a hag in a fairytale, you know the one who’s not what she appears to be and is just waiting to see how people will behave? I saw the best and the worst of people, and those are lessons that have lasted a lifetime.

I’m glad I can look back on those memories and keep my perspective even through this. Plus, I can hardly wait to meet the homeless people on that hill. I can only imagine the stories they might share—and who knows, maybe one of them plays the guitar!

Find more info about my memoir, “Homeless in Hawaii,” here:

Posted by Crazy Life of a Writing Mom at 6:40 PM