Playing Ball with the Boys 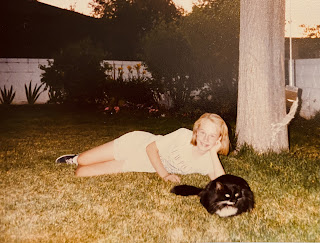 This was published several years ago in a magazine and then re-ran again in 2019. It still makes me smile.

"I'm not like anyone in this family," Ruby said.

“Oh, yes you are.  I was always hatching crazy schemes—just like you."

“Yep. Do you have time to hear a story?"

She wiped her tears away and nodded. “Sure.”

I never thought the story was anything special—not until my daughter heard it.

I was a dorky twig, far better at playing sports than playing dolls. I knew I'd be a star on the boys' team if they just let me play.

“We don't let girls play with us. Girls are bad luck," they said over and over.

That just proved it; they were idiots. The only time girls are unlucky is when you make them mad.

I started practicing baseball every day after school until the sun went down, and I actually got pretty good. My mom, dad, brother and sister all taught me how to hit and pitch. If those boys would just say “yes,” they wouldn't know what hit 'em.

My dream almost ended. I could have stayed friendless and sad—or I could've stooped to ultimate evilness and played dolls with Kristi Nelson and her posse of girlie girls. That wasn't for me though.

I watched the boys setup one day after they said “no”…again. The leader, Jeff, always brought the ball and the bat. He'd put them out in the hall during class, then at recess, all the boys would go and play.

Stealing that ball was easier than stealin’ second.  I remember how I raised my hand and told the teacher I needed to use the bathroom. That was a terribly sweet lie. I ran into the hall, looked back and forth, then stole Jeff's ball. For a brief moment, I felt bad. Maybe I didn't really have to go to the bathroom, but I sure tried anyway.  It wouldn't be good to lie AND steal on the same day.

Well, when the recess bell rang, those boys scrambled and hooted. Everyone got out to the field. For once I smiled, just watching. Jeff came out last. He explained something to the boys who looked awfully mad. They were just about to leave the field when I walked closer.

“Who would-a thunk he'd leave it at home?" a kid whined.

I threw the ball up and down. Not to brag, but I caught the sucker every time. “Funny thing," I said to the boys. “I brought a ball today. What are the odds?" I tried spitting, but I'd never done it before and the stuff stayed hooked to my lips longer than normal. I wiped it away fast and cursed all those old movies for making spitting look easy.

“Give us the ball!" a boy screamed.

All the boys groaned. “But that's bad luck to play with a girl."

“Is it better to not play at all?" I asked, and they finally let me play.

I'd like to say I got a home run, even though I didn't. But I will say that I proved myself and they seemed really impressed. Jeff walked with me after last recess and smiled. “You know, this ball looks an awful lot like the one I bring."

I had to think fast. I looked up at him. My face couldn't charm him—too bad for the ugly phase. But at least I could win him over with my wit. “Does it really surprise you that we both have such good taste?"

The next day when Jeff's ball showed up by his stuff in the hall, he didn't even seem surprised. I went and stood by the field, a bit sad that I'd never get to play again.  Maybe I should have just reconciled to playing dolls with Kristi Nelson...forever.

I sat down on the grass and prepared to watch the boys forming their teams. It was time for the captains to pick their star players. When it was Jeff's turn, he smiled right at me and pointed.  "Stilson, for first pick because that girl really knows how to hit a ball. And because she didn't give up."

I stood by him and beamed. “Isn't it funny how my baseball just showed up today?" he whispered.

“So, that's how I started playing baseball with the boys," I told my daughter.

“It sounds like something I would do!  Mom," she said seriously, "you're all right."

“You too."  I smiled, then patted her on the back and thought I just might start calling her by our last name.

P.S. It’s crazy to think that I’ve been friends with Jeff for almost 30 years now! (We were 9 when we met.) He’s a firefighter and has the most beautiful wife and kids. It’s been pretty fun to follow his story—I’ve even heard he’s still playing ball. ⚾️

Posted by Crazy Life of a Writing Mom at 3:12 PM