Life Will Surprise Ya 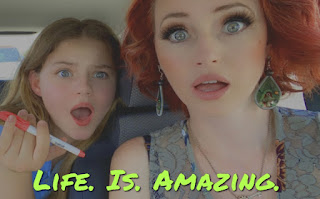 I sat by the store’s garbage can, right outside the entrance. Luckily, Indy had no idea that I’d begun feeling so nauseous on this shopping trip. She’d waited days and days for the outing, and I didn’t want it getting ruined—especially because of cancer. Cancer has taken enough from us. “Mike, you’ll help her get some stuff?” I whispered. “Make it fun?”

He nodded. “You go rest in the car. I’ve got this. She’ll have an awesome time.”

Indy seemed happy to shop with Mike—and that made a huge difference for me. But after I stepped outside, a wave of fatigue hit so strong that I couldn’t take another step. In fact, I could’ve cried as I placed my hand against the exterior brick wall and then slumped to sit by the garbage can at the store’s entrance.

So many people passed. One fancy woman studied my pale face and stick legs, then tipped her nose in the air and walked on. This continued until I willed Mike and Indy to burst from the store. I couldn’t stand people’s judgement anymore, but I needed help getting back up.

I finally stared, hoping to see my family, and that’s when one of the most beautiful women I’ve ever seen came out of the store. I went to look away, but she gazed down at me with so much kindness. “How’s your day going?” she asked, stopping momentarily with her friend.

After they left, my load felt somehow lighter. It seemed as if an actual angel had stopped to check on me. But then my thoughts changed. I thought about how easy it is to be nice when things are good. It’s a lot harder when you’re dealing with sickness, suffering, and eventually death. “I bet she’s never experienced hardship,” I thought. “Things must be so easy for her. She exudes so much joy. I remember those days.”

I’d been having those thoughts, rationalizing her kindness, when that same woman and her friend—the exact lady who could’ve been a Disney princess—came back to talk with me! “I’m sorry,” the supermodel said, “but I felt like God told me to come back and ask if there’s anything you need prayer for.”

I blinked, completely shocked. “I have stage four cancer,” I said, and her eyes grew wide.

Tears filled my eyes as we both relayed that we never would’ve expected for the other to have cancer. I couldn’t believe how much we had in common or how she suddenly felt like such a kindred spirit. “How old are you?” I asked.

“I’ll be new to the area soon. I’m actually moving here. Do you recommend a place for cancer treatments?”

After we finished exchanging information, Mike came out and helped me walk to the car.

“That was the strangest thing,” I told Mike and Indy. “I’d just been thinking how she probably didn’t have a care in the world, and then she came back and ended up telling me that she has cancer!”

“Wow, that’s crazy, Mom. It goes to show we don’t always know what other people are going through. Looks like you have another story to write about!”

“You’re right! Thank God I went to sit outside when I did.” I was supposed to meet that woman, but without the bout of fatigue and pain I never would have. “Life is so ironic.” I sighed. “It’s been a pretty good day…after all.”

Posted by Crazy Life of a Writing Mom at 5:59 PM